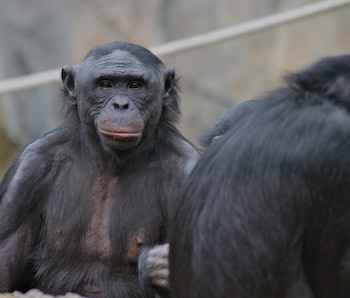 Among the countless shitty things humans have done in the past year, we’ve revived Nazism, attempted to cover up egregious sexual abuse, and resurrected the threat of nuclear war — hardly behavior befitting of the Most Highly Evolved Species on the planet. That title, scientists recently suggested in Scientific Reports, should probably go to our primate cousins, the bonobos, who have figured out the one thing humans seem utterly incapable of doing: being nice.

When evolutionary anthropologists from Duke University hung out in Africa’s Congo Basin to observe bonobos — the great ape species considered to be most closely related to us, along with chimps — they discovered that, unlike us, the animals seemeded hard-wired to act unselfishly, helping complete strangers without expecting anything in return.

As they describe in their paper, at the Lola ya Bonobo sanctuary, they set up a small experiment to test the limits of the bonobos’ selflessness. One by one, 16 bonobos were led into a small room divided in two by a tall fence. On the opposite side of the fence, a piece of apple dangled from the ceiling by a rope. There was no way a bonobo in the first room could have reached the apple on its own, but it certainly could climb the fence to release the apple for a second bonobo, on the floor of the other room, to catch.

In other words, bonobos are willing to take the time and effort to help out a total stranger, even when there’s absolutely no benefit to them doing so. Humans, meanwhile, can’t even take steps to cut out emissions,, when doing so would benefit literally everyone.

This behavior won’t be terribly surprising to anyone who’s ever heard about the idyllic nature of bonobo society. The matriarchal communities are notoriously peaceful, and conflicts are more often than not smoothed over using sex rather than violence. The reason the researchers think the bonobos are so selfless and nice to each other is that they’ve learned — and internalized — the simple fact that the benefits of being nice to strangers far outweigh the costs.

“All relationships start between two strangers,” says Jingzhi Tan, Ph.D., the postdoctoral associate in evolutionary anthropology at Duke University who co-authored the study.

“You meet a stranger, but you may meet them again, and this individual could become your future friend or ally. You want to be nice to someone who’s going to be important for you.”

It’s so simple that even an ape can understand it. Why can’t we?

More like this
Science
6.22.2022 8:26 PM
Yes, there are mites living on your face — and they can poop, a new study finds
By Allison Parshall
Science
6.23.2022 6:00 PM
Reptile longevity is even more complex than we imagined — study
By Elana Spivack
Science
6.19.2022 1:00 PM
What is my dog thinking? Science may finally have an answer
By Tara Yarlagadda
Related Tags
Share: