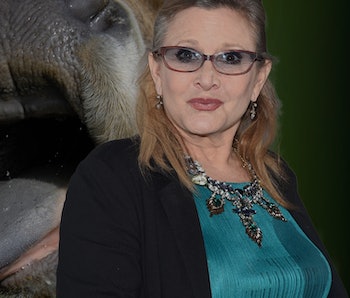 After the flood of stories of Harvey Weinstein’s horrifying sexual misdeeds coming to light after far too long, other tales about Hollywood’s plague of sexual abuse and assault are getting told as well. One such story involves the late, great Carrie Fisher, a vile producer, and a severed cow tongue.

During the Tucson, Arizona, radio station 94.9 Mix FM’s “Morning Mix” on Monday, Fisher’s longtime friend Heather Ross recalled how the actress once stood up for her against a lecherous Sony executive. The Oscar-winning producer, who Ross didn’t name, had picked her up to take her to a supposed business dinner around 2000, but instead sexually assaulted her in the car.

Ross told Fisher about what had happened, and Fisher saw the producer two weeks later at Sony Studios. Ross relayed what Fisher said she did to the producer afterward.

“I went to his office and personally delivered a Tiffany’s box wrapped with the white bow … It was a cow tongue from Jerry’s Famous Deli with a note that said, ‘If you ever touch my darling Heather or any other woman again, the next delivery will be something of yours in a much smaller box,’” Ross recalled Fisher telling her.

Ross stresses that Fisher personally delivered the cow tongue, which was probably gross, as a quick Google search will reveal.

The story is yet another example of how amazing Carrie Fisher was, but let’s not mistake her awesome defense of a friend as some kind of a feel-good story. There was, and is, an epidemic of sexual assault in and outside of Hollywood, and men like the producer who assaulted Ross probably deserved much more than a cut of meat.

If you liked this article, check out this video about all of the times people got burned by Princess Leia.