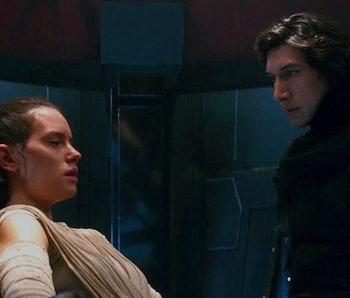 Star Wars Celebration is just a few days away, but a massive new Episode IX leak could overshadow the main event. The latest rumors about Star Wars: Episode IX could be very good news for anyone hoping that Rey and Kylo Ren get together while also revealing a horrifying new character called “the Oracle” that may haunt our nightmares for years to come.

The new leak comes from redditor u/JediPaxis, who also moderates the Star Wars Leaks subreddit and has shared accurate information in the past. This time, the leak focuses on Kylo Ren’s story in Episode IX (specifically in relation to Rey), along with “the Oracle,” a bizarre new creature who ties into that storyline.

According to u/JediPaxis’ “trusted source,” when Star Wars: Episode IX picks up, Kylo Ren will still be struggling to choose between the Light and Dark sides. At the same time, he’s apparently in “love” with Rey and attempting to fix their relationship. Based on what we saw at the end of The Last Jedi, we’re guessing this won’t go particularly well.

However, things really get interesting when Kylo comes into contact with “the Oracle,” described by u/JediPaxis as a sort of alien parasite that sits on the head of a giant sleeping baby. (Yes, actually.) In Star Wars: Episode IX, the Oracle will be created using a puppet or some other type of practical effect. You can see a “faithful” recreation of the leaked concept art in the original Reddit post embedded at the bottom of this page.

It’s also worth noting that this Oracle design appears to line up with a previous leak, which accurately revealed new looks for characters like Rey and Finn in Star Wars: Episode IX.

It’s unclear if Kylo seeks out the Oracle or he’s “summoned” to it. We also don’t know where the Oracle lives, but it could be in a new swamp area. It sounds like this thing could basically be Episode IX’s version of Yoda — except, you know, a Lovecraftian nightmare instead of a cute Frank Oz creature.

There’s still a lot we don’t know about the Oracle, but to be honest, I’m pretty into it. If Star Wars: Episode IX wants to get weird, I’m cool with that — as long as it also delivers a solid ending to this trilogy and the entire Skywalker saga.

Of course, it’s also possible the Oracle could be a minor character that only shows up for one or two scenes. In that case, Kylo Ren’s obsession with Rey feels like a much more important plot line. If Episode IX needs to put an end to the seemingly endless battle between the Light and Dark sides of the Force, than having these two opposing characters fall in love could be the way to do it.