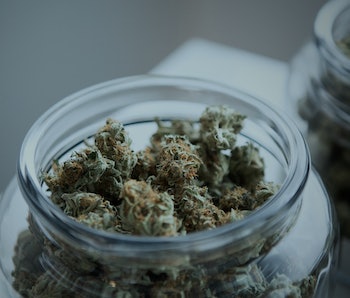 On average, 130 Americans die each day from an opioid overdose. But millions of Americans experience chronic pain, and so far opioids seem to be the best option to treat that pain. The dilemma at hand is how to reduce reliance on opioids while still giving patients the relief they need. Solving this problem is a massive undertaking, but new research presented Tuesday at the 2019 Experimental Biology meeting in Orlando suggests the solution may lie in cannabis.

"The idea is that we can take advantage of both of their strengths and avoid their drawbacks."

The study, which has been submitted for publication and is currently under peer review, builds off of research from 2011, when scientists discovered that patients with chronic pain experienced greater relief when their opioid treatment was combined with cannabinoids, the active ingredients in marijuana. That small-scale study also revealed that combined therapy could reduce opioid dosages, minimizing the risk of addiction. For the scientists from the University of Texas Health Science Center at San Antonio, the question became: Would the combination be safe for the brain?

Lead author and postdoctoral fellow Vanessa Minervini, Ph.D., explains to Inverse that the two drugs have two shared effects: They both relieve pain and they both impair cognition. Because this combination is so potent for relieving pain, scientists were concerned that the side effect of impaired cognition would also be amplified.

However, the opposite proved to be true.

Minervini designed a study in which several monkeys were given doses of morphine (the opioid) and CP55940, a synthetic drug that mimics the activity of tetrahydrocannabinol (THC), one of the chemical compounds in cannabis. Some of the monkeys received only morphine, some only CP55940, and others received a combination of the two.

Then, all of the monkeys did a matching-to-sample task meant to measure impulsivity and capability for memory. If they could match a colored rectangle on a touchscreen tablet with a rectangle of the same color after a delay, then they would receive a treat. If not, the trial was over.

Taking each drug on its own altered monkey performance on the test by delaying their average response rates and decreasing their accuracy. The morphine-CP55940 combination, in contrast, didn’t cause the same level of delay and inaccuracy — it caused even less of an effect than each drug taken individually. The team confidently concludes that combining these drugs does not significantly increase memory impairment or impulsivity.

There is no clear explanation for this result yet, but Minervini says it could be that both drugs cause different brain regions to become involved, or it’s possible that the number of receptors that interact with these drugs changes across the brain. The immediate next step is developing a broad battery of tests designed to evaluate different aspects of cognition. Once they can identify which brain regions are associated with various cognitive tasks, they can have a better sense of how interacting drugs affect those tasks.

The drug combination, Minervini explains, is likely more helpful than either of the drugs on their own. The lower use of opioids in states with medical marijuana laws suggests that people are eager to find pain relief alternatives to opioids.

Opioids, Minervini points out, are typically not very good for inflammatory or neuropathic pain. However, there’s some preliminary evidence showing that cannabinoids can help with those issues. But for the other types of pain, she explains, “opioids are still the best drugs we have.”

“The idea is that we can take advantage of both of their strengths and avoid their drawbacks,” Minervini says. “We think that by combining them, we can get the anti-inflammatory pain-relieving properties from the cannabis, decrease the dosages of both that are needed, and when we decrease those dosages, we should, in theory, be able to avoid the side effects that are apparent in larger doses.”

Those side effects include addiction, which drives overdose, as well as other adverse effects that pain patients experience. Constipation is a huge issue, as well as the feeling of cognitive confusion.

She’s hopeful this study can be a stepping stone towards creating a safe and effective treatment that doesn’t come with the risk of abuse and addiction.

The current opioid epidemic underscores the need for safe and effective pharmacotherapies for treating pain. Combining opioid receptor agonists with drugs that relieve pain through actions at non-opioid mechanisms (e.g., cannabinoid receptors) could be a useful strategy for reducing the dose of opioid needed to achieve pain relief in the absence of reinforcing (abuse) or respiratory-depressant (overdose) effects, thereby reducing the risks associated with the use of opioids alone. Opioid/cannabinoid mixtures might be useful for treating pain; individually, opioids and cannabinoids have modest effects on cognition, and it is important to determine whether those effects occur with mixtures. The present study used delay discounting and delayed matching-to-sample tasks to determine the effects of the mu opioid receptor agonist morphine (0.32 – 5.6 mg/kg), the cannabinoid CB1/CB2 receptor agonist CP55940 (0.0032 – 0.1 mg/kg), and morphine/CP55940 mixtures on impulsivity (n=3) and memory (n=4) in rhesus monkeys. In the delay discounting task, monkeys could respond on one lever to receive one pellet delivered immediately or on a second lever to receive three pellets delivered immediately or after a delay (30 – 180 sec). In the delayed matching-to-sample task, 20 touches on a colored rectangle (e.g., blue), displayed on a touch-sensitive screen, presented comparison stimuli, one of which matched the original stimulus (e.g., blue rectangle), either immediately or after a delay (2 – 64 sec). Touching the matching stimulus delivered a pellet with audio and visual feedback; touching the non-matching stimulus terminated the trial. Data were analyzed using a two-way ANOVA with dose and delay as factors. Given alone, each drug decreased rate of responding without modifying choice; morphine/CP55940 mixtures reduced choice of one pellet in a delay dependent manner, with monkeys instead choosing delayed delivery of the larger number of pellets. With the exception of one dose in one monkey, performance was not altered by morphine alone or CP55940 alone in the delayed matching-to-sample task. Morphine/CP55940 mixtures decreased accuracy in two monkeys, but the doses of each drug in the mixture were equal to or greater than doses that decreased accuracy or response rate with either drug alone. In both tasks, rate-decreasing effects of morphine/CP55940 mixtures were additive. Overall, these data provide additional evidence supporting the notion that opioid/cannabinoid mixtures that are effective for treating pain do not have greater, and in some cases have less, adverse effects compared with larger doses of each drug alone.