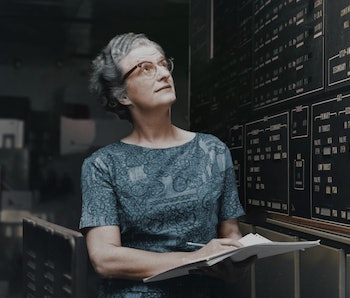 March is, by declaration of the United States government, Women’s History Month. In the original 1987 joint resolution, it notes that American women have been “consistently overlooked and undervalued,” despite the contributions they’ve made to the country. In 2019, women continue to be overlooked despite steps towards equality. A study published Wednesday in JAMA explains how this persists in the sciences, casting a sideward glance at the US government.

The study from Northwestern University is the first study to prove women receive less money when they submit grants to the federal government. The analysis revealed a substantial difference in funding provided by the National Institutes of Health (NIH) to first-time male and female principal investigators, the lead researchers on a grant project.

“If women are receiving less grant support from the very beginning of their career, they are less likely to succeed,” co-corresponding author Teresa Woodruff, Ph.D. explained Wednesday. “This shows women are disadvantaged from the very first NIH grant they submit relative to their male counterparts. This represents an early stumbling block of $41,000.”

A funding disadvantage can handicap female scientists from the very beginning of their careers. With less federal funding, women can’t recruit the same number of grad students to work on their research and buy the same amount of equipment as their male peers. It’s also well established among scientists that receiving the “right kind of grant” from the NIH means a scientist is more likely to be promoted.

The NIH was unable to provide comment on the disparity by the time of this article’s publishing.

In the study, Woodruff and her colleagues evaluated the backgrounds of and grants awarded to 53,000 first-time principal investigators. Fifty-seven percent of the scientists are male, and 43 percent are female. These candidates had similar successes leading up to the time they applied for an NIH grant: They had published the same average number of articles, which received the same average number of citations across the same range of fields.

But when the team looked at the amount of money given to first-time male and female grantees by the NIH between 2006 and 2017, gender disparity emerged. Across all grant types and institutes, women received an average grant amount that was far less than what men received: $126,615 compared to $165,731.

A further look into the data demonstrated that first-time female grant awardees from Big Ten, Ivy League, and NIH-funded institutions all received less than their male peers. The biggest difference was at the Big Ten universities, where men received, on average, $81,711 more than women.

When it came to the ten highest-funded grant types across all institutions linked to the NIH, female principal investigators received an average award amount of $305,823, while men received $316,350. The only type of grant in which women received more than men were R01 grants, which support health-related research: On average, women received $15,913 more than men.

Unfortunately, the study results fall perfectly in line with historical trends. Progress has been made in closing the gender game in STEM — many countries now have equal numbers of men and women entering STEM courses, and it’s no longer highly unusual to encounter a female scientist, as it once was. But there is a problem with retention.

Less than 30 percent of the world’s researchers are women. This figure is not skewed by the fact that some countries have vastly more women in STEM than others. The percentage holds across the planet.

What one makes and what one can afford changes the chance of success in the field. That the women in this study received less from the government fits into a larger American picture: Women still earn just 82 percent of what men earn.

Federal funding is associated with the quality of science and researchers’ professional advancement. Female junior faculty received less university start-up support than males in one study, a factor associated with early-career attrition rates. We investigated another potential association: the size of National Institutes of Health (NIH) grant awards to first-time awardees.