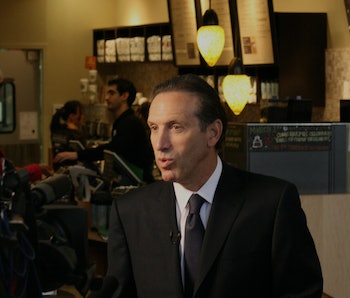 Sure, the 2020 presidential ballot is already feeling a little, uh, crowded, with Democratic candidates like Elizabeth Warren, Kamala Harris, Kristin Gillibrand, Tulsi Gabbard and Julian Castro having all announced their intent to run in the past month. But folks, we now know the race is starting to get really serious with the entrance of the first unwanted billionaire: Former Starbucks CEO Howard Schultz, whose tentative announcement on 60 Minutes and subsequent tweet immediately prompted some merciless, joyful, perhaps-excessive-but-also-definitely-not, roasting.

On Sunday, former Starbucks CEO Howard Schultz told CBS’s 60 Minutes that he was seriously thinking about running for president, an announcement he reiterated in a video uploaded to Twitter. The clip doubled down on Schultz’s main talking points in the interview, where, citing the toxic nature of “revenge politics,” he told correspondent Scott Pelley that he would potentially enter the 2020 presidential race as a “centrist Independent outside of the two party system.” A white, male billionaire with no background in politics, criticizing the American political structure as the self-appointed voice of the silent majority? Hmmm, now where have we seen that before?

Instantly, Schultz’s tweet was subjected to the new litmus test for political hopefuls: The Twitter ratio, which holds that when the number of likes and retweets can be divided into the number of replies telling you to screw off, then it’s objectively time for you to smash that delete button. And ooh boy, did Schultz get ratio’d. Just a handful of hours after publishing, Schultz’s officially unofficial campaign announcement has roughly 600 re-tweets — and more then 8,000 replies. While subjective assessments can be tricky, that’s still enough to be considered a resounding, “Gonna be a no from me, dawg” from the Twitter-verse.

Much of the criticism stems from a fear that an Independent, business-minded candidate, particularly one whose platform currently rests on frustration with the two party system, could potentially divide the anti-Trump base.

Others, though, just appear irritated that another under-qualified rich dude, especially one whose former company has become a harbinger of gentrification in communities across the country — is vying to be the most powerful person in the world. Others pointed to Schultz’s uncomfortable posturing on racial relations — remember when he reportedly established a company-wide policy encouraging employees to “chat” with customers about racial justice? — as another possible sign the billionaire is, perhaps, just a bit out of touch with the needs and daily lives everyday people, even his own employees.

The ratio, considered a semi-empirical method for separating a “good tweet” from a “bad tweet” in the ethical quagmire of Twitter, has been a famously tough barometer on the politically-minded. But with social media popularity increasingly translating into real-world, in-the-polls support, politicians have been forced to enter the ring, perhaps before they’re ready. Schultz has posted just four tweets since establishing his Twitter account 24 hours ago. Every single tweet has gotten slammed by the Twitter ratio.