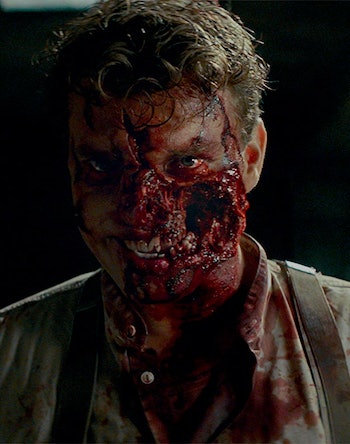 In the middle of Overlord, one character encounters a zombified human in the bowels of an underground Nazi laboratory. Not only does it move inhumanly fast, but it’s strong enough to throw you across the room with ease, all while shrieking at an otherworldly volume. This zombie doesn’t hunger for brains — its only goal is violence. Even when someone triple taps this monstrosity with three pistol shots to the skull at point-blank range, the zombie heals fast enough to continue its dogged pursuit in seconds.

If there’s a more powerful and horribly scary zombie out there in cinematic history, I’ve never seen it. Overlord is the most frightening zombie movie in recent times because it does something new with its story and with the nature of these zombies. And it more than delivers on thrilling action sequences, gore, and an explosive pace.

Overlord might just be the best zombie movie of all time. It’s definitely the best Nazi zombie, and it’s also a damn good war movie — even without the zombies.

Overlord takes place on the eve of D-Day. Caught behind enemy lines, a group of American paratroopers is tasked with destroying a German radio tower. Not only do they have to combat Nazi forces, but they soon discover an underground Nazi lab where a mad scientist has created violent monstrosities that could reshape the course of history.

Overlord mines the overused sub-genre of Nazi zombies, one that the Call of Duty video game franchise continues to fruitfully explore. But what even was the last “good” Nazi zombie film? Has there ever even been one that delivers enjoyable action and gore along with compelling character development?

"Overlord is able to have its brains and eat them too

Unlike the sophomoric schlock of Dead Snow, Overlord is able to have its brains and eat them too. It’s both a gripping, action-packed war movie and the most thrilling zombie film in recent memory, immaculately paced with just the right amount of violence and gore. Overlord doesn’t need a zombie subplot to be a great film, but in going down that path, the movie is elevated to something that much more special.

These zombies — if you could even call them zombies — become uglier and more twisted mad than even Red Skull. In that sense, Overlord does feel a lot like Captain America: The First Avenger. How might a super-soldier have changed the course of World War II? What if a deranged villain had succeeded in some grand plan to give the Nazi forces otherworldly powers?

The unique form of zombification in Overlord is more like a supersoldier serum that has gruesome side effects. Anyone can get Captain America’s speed and strength with Wolverine’s healing factor by injecting this Nazi serum. It’s derived from some ancient goop churning underneath a French village, but the nature of the pseudoscience hardly matters when human beings are stuffed inside huge sacks or they’re impaled with giant injection tubes.

Originally rumored to be some kind of Cloverfield sequel on account of J.J. Abrams name being attached, Overlord actually has zero ties to the interdimensional kaiju franchise, and that’s a good thing.

The film more than functions on its own as a gripping action movie, and even if we never really learn the specifics of how or why this horrible contagion exists, there’s still plenty of intriguing action to watch and storytelling to engage with.

The nature of this zombie serum is one Mystery Box that J.J. Abrams may never open. And that’s probably for the best.