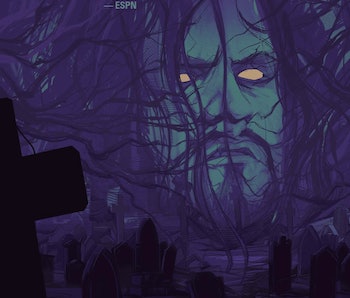 The Undertaker, one of the most mystifying personalities in WWE history, has been around for longer than comic book characters like Deadpool and Harley Quinn. So it’s about time the “Phenom” gets his own comic. And unlike the very ridiculous pro wrestling comics from the ‘90s, sports journalist Chad Dundas and illustrator Rodrigo Lorenzo will reveal to fans what they rarely get to see from the Deadman: His humanity.

On October 31, WWE and BOOM! Studios will publish WWE: Undertaker, a new graphic novel that gives fans the definitive origin of the Undertaker and recounts (and at times, rewrites) his historic career of almost thirty years. The comic also explores what happened in between Taker’s legendary matches, when the cameras stopped rolling but the legend of the Undertaker continues.

Dressed like a seven-foot undead gunslinger and wielding gothic superpowers, the Undertaker often feels more like a Marvel or DC villain than a WWE superstar.

“In many ways the Undertaker is the perfect crossover comic book character,” Dundas tells Inverse. “He’s larger than life.”

Since making his debut at Survivor Series 1990, the Undertaker has stayed fresh for decades thanks to constant reinvention. Even now, with the WWE long past its Saturday morning cartoon antics and evolved into a serialized drama that’s at least somewhat grounded in reality (no doubt influenced by the “realism” of MMA and social media), the Undertaker still electrifies WWE audiences in ways few performers his age can. It’s almost inhuman.

“He has this mysterious persona for himself. He wears a costume analogous to what you see in a comic book,” Dundas says. “WWE always toys with him being impervious to pain, having ‘powers,’ and always coming back from the brink of defeat in order to triumph.”

Dundas’ graphic novel exists between WWE’s hazy barriers separating fantasy and reality. The comic doesn’t pull back the curtain so much that readers get to know Mark Calaway, the now 53-year-old semi-retired performer who dropped out of Texas Wesleyan University to pursue a career in wrestling. It’s still an Undertaker comic, with one foot in reality and the other in total fantasy.

“I wanted to show the human drama that would go on in the fringes of what you saw in television,” says Dundas. “Frankly, you’ve seen all the stuff on television. I wanted to illuminate what you hadn’t seen.”

WWE: Undertaker adheres to a level of “kayfabe” — industry slang meaning the stories in pro wrestling are true. Dundas plays by the rules of WWE’s canon for the Undertaker (i.e. Taker’s brother really is Kane, Taker really was raised by Paul Bearer, etc.) but doesn’t give Taker his superpowers. Instead, Dundas makes “The Undertaker” a dark persona born out of the lonely childhood of a young, orphaned Texas brawler who lost his family in a tragedy.

“That was an artistic choice I had to make early on, to make him a mortal human or a supernatural being,” Dundas says, citing his journalism background for making him more “comfortable” with human stories than fantastical ones.

“The writing I’m familiar with deals with human consequence, human emotion. Human drama comes far more easier to me than if it was a fantasy. Whatever genre you’re dealing with merely gives you parameters to tell that story, but the real engine that drives it are human beings.”

WWE: Undertaker represents a massive creative leap for Dundas, a journalist with bylines at ESPN, the Associated Press, and Bleacher Report. (He made his fiction debut with his novel Champion of the World in 2016.)

Undertaker is his first comic, but while learning the language of comic scripting was difficult, it was condensing three decades of WWE stories (which can cease to make sense after just weeks) into one narrative that posed an even bigger challenge. Especially when the Undertaker has tangled with icons of every era, from Bret Hart to Sting and from “Stone Cold” Steve Austin to John Cena.

“Clearly one of the challenges was portraying 30 years of professional wrestling storylines in a way that makes sense as a narrative arc,” Dundas says. “That involved a lot of choices, some very pragmatic.”

That, and a handful of likeness issues surrounding certain WWE characters, forced Dundas to reinterpret iconic moments from the Undertaker’s career wholesale.

“We had to take a direct route in terms of telling a beginning, middle and an end,” he says. “The Undertaker has been in three or four Buried Alive matches in his career. Having multiple Buried Alive matches didn’t make tons of sense. I wanted to keep the audience engaged, so a lot of corners were cut. Things were changed to make sense.”

Ultimately, WWE: Undertaker is more a celebration for one of pro wrestling’s most beloved, and often feared, characters, than a history text in comic book form. He’s a character that transcends whatever medium he appears, whether it’s a WWE ring or a graphic novel.

“A character like this could go wrong in a lot of different ways,” Dundas says. “You have to have exactly the right performer fulfilling that role to make that work. The WWE happened to have Mark Calaway, who turned out to be that person. To me the character is a real triumph of storytelling and human performance. Here we are, 30 years later still talking about his character.”