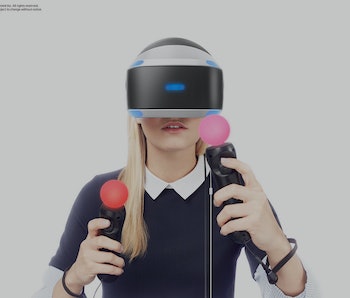 Sony published a new patent this month that could revolutionize virtual reality gaming. The company’s filing describes a new head-mounted display with the ability to track positions of fingers on the user’s hand, creating a new form of gameplay where players ditch the controllers and directly interact with the virtual world by reaching out.

The October 11 patent is titled “Gaming Device With Rotatably Placed Cameras,” and it received new attention on Monday amid speculation around Sony’s plans for the PlayStation 5. The company’s president confirmed work on a PS4 successor earlier this month, while Bethesda and Infinity Ward have both dropped hints that work is underway on next-generation game titles. PlayStation VR launched in 2016 for an initial price of $399, and it’s so far sold over three million units, leading to talk around what Sony may plan for a successor.

The patent describes a method of identifying fingers on a hand using a wrist-worn wearable device that could transmit infrared light. Cameras on the headset can pick up this light, while cameras on the wrist-worn device can help identify the location of the fingers.

The inside-out tracking nature would make a welcome change from the current PS4 setup, where a two-lens camera is placed in front of the TV to track lights on the headset, controller, and PlayStation Move single-handed wands. The technology enables Oculus Quest, an upcoming self-contained headset that uses a mobile processor to run applications without external support, to offer full room-scale virtual reality without fiddling about with sensors.

The tracking would also enable Sony to offer the ability to switch to a view of the outside world, or even to bring the outside world into the gameplay. Sony CEO Kenichiro Yoshida told The Independent that “VR is still in the very early stage and one potential evolution of VR is mixed reality. One of the issues with VR is that you can’t see outside, it’s a little bit dangerous - you have to sit down to use it. Also, (there is) VR motion sickness. So there is a lot of room of room to improve in VR experiences and you will see the change and the improvement.”

Sony’s implementation makes a number of changes from the Quest, though. The patent also suggests the possibility of ankle connectors that could potentially track feet, bringing a whole new level of immersion to a game like FIFA. The patent also suggests wireless communication with the game console, meaning users would benefit from the high visual quality from a future system without the wires associated with the PS4 version. The Quest’s power, because of its mobile processor, has been compared to the PS3.

Virtual reality hand tracking is not a completely new idea, as companies like uSens have demonstrated. If Sony decides to bring it to the PlayStation, with the PS4 having sold over 80 million consoles, it could bring this technology to the mass market and transform gaming.

Read the patent abstract below:

A method to identify positions of fingers of a hand is described. The method includes capturing images of a first hand using a plurality of cameras that are part of a wearable device. The wearable device is attached to a wrist of a second hand and the plurality of cameras of the wearable device is disposed around the wearable device. The method includes repeating capturing of additional images of the first hand, the images and the additional images captured to produce a stream of captured image data during a session of presenting the virtual environment in a head mounted display (HMD). The method includes sending the stream of captured image data to a computing device that is interfaced with the HMD. The computing device is configured to process the captured image data to identify changes in positions of the fingers of the first hand.