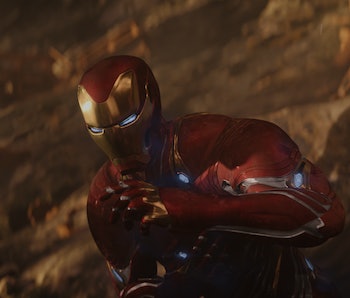 Iron Man is weaponizing everything, including the kitchen sink, to defeat Thanos in next year’s Avengers 4. But a professor of nuclear physics says Tony Stark’s “Proton Cannon” is wildly impractical, even if it’s built by a genius to be used against a purple alien with the powers of a god.

On Thursday, Marvel fans began to speculate when a photo from the set of Avengers 4 revealed a large cannon-like prop that bears a resemblance to Iron Man’s “Proton Cannon” from the Marvel vs. Capcom arcade games.

But when Inverse showed the photo to Ani Aprahamian, Ph.D, who teaches experimental nuclear physics at the University of Notre Dame, she said it was a bit too small to fire protons.

“A proton beam…like at the LHC produces almost 0.6 Amp of current,” Aprahamian wrote in an email, referring to the Large Hadron Collider built by CERN and located underground near Geneva in Switzerland.

To Tony Stark’s credit, that’s enough power to kill someone (maybe even Thanos) according to Aprahamian, “but it is a huge ring and [requires] many laps of the ring to get to high energies.”

Stark’s Proton Cannon, as seen in Marvel vs. Capcom 2 — and possibly in Avengers 4 — obviously does not have a huge ring for the currents to lap around. And despite its size, it’s barely a fraction of the size of the LHC.

Even if Iron Man could somehow overcome that technological hurdle, the idea of a proton cannon just isn’t all that practical. Aprahamian explained that the protons would quickly disperse as soon as they left the cannon, making it all but useless as a ranged weapon.

“A lot depends on the energy of the proton beam,” says Aprahamian, explaining that 10 MeV, or megaelectronvolts, would travel “maybe one meter in air. Hard to do a cannon like that.”

Of course, Tony Stark is the most brilliant (if arrogant) mind of his generation, possibly in the universe. If Stark can find a way to defy the laws of physics, you can bet that he will. Whether or not it’ll actually help the good guys win is another question entirely.