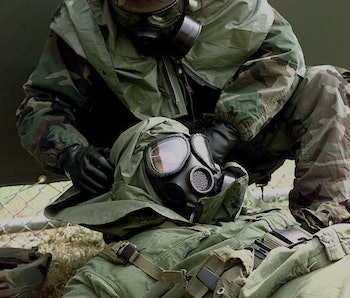 Delivered innocuously on the tip of an umbrella or a doorknob, nerve agents are the epitome of quiet, but deadly. By cutting off the muscular control to breathe, the end result of these agents of chemical warfare is asphyxiation in a matter of a painful minutes.

Dealing with these unpleasant compounds has typically required a cocktail of chemicals, but new research published in Chemistry - A European Journal lays out another potential method of defense against these types of weapons. Scientists at The Ohio State University recently explored the possibility of using something they call ‘molecular baskets’ to capture nerve agents or other harmful air-borne agents with future hope for biological use.

How Do These ‘Molecular Baskets’ Work?

Jovica Badjic, professor of chemistry and biochemistry at The Ohio State University, created the designer molecules in the shape of baskets. Each molecule has an amino acid on the rim which helps specify what the basket will target. When the team shines ultraviolet light on these molecules, the compounds lose carbon dioxide molecules, which forces the basket to come together and aggregate, picking up nerve agents along the way to form a collective mass.

In previous research, these light-activated molecules formed an easily removable solid. Although promising in a tank of water, creating a solid inside the body isn’t a great idea. In Badjic’s most recent study, molecular baskets with glutamic acid bunched together as nanoparticles instead of a solid. Because these are tiny particles (50-100 nm in diameter) and stayed in solution, they could be theoretically just pass through a human body and exit without issue.

Nanoparticles have fascinated the research community as a promising tool for drug delivery — particularly to combat cancer — for a long time. In this case, instead of delivering substances into the body, Badjic’s new molecular basket capitalizes on taking a substance out. Once refined, the nanoparticles could be consumed before entering conflict areas or be integrated into the current treatment cocktail.

When it comes to nerve agents, speed is an important part of the equation, as they can act in a matter of minutes or span across days.

“I do believe the [molecular] recognition process is pretty fast.” says Badjic. “If nanoparticles are in the body already, you lower the concentration of nerve agents in solution, and you slow down the process.”

The molecular baskets in application would race against the nerve agent’s goal to bond to the enzyme acetylcholinesterase (AChE). Nerve agents bond to AChE to block the production of a neurotransmitter that allows the body to communicate with its organs. By collecting the nerve agents and whisking them away before this connection happens, molecular baskets could either prevent or reduce the intensity of this attack within the body, paving the way for the other drugs, such as diazepam and midazolam (anticonvulsants), to finish the battle.

Badjic’s molecules may also have a use when the body isn’t under a toxic countdown. Nerve agents and pesticides actually share a similar molecular structure — similar enough that molecular baskets could pick them up as well.

“There’s about 200,000 deaths per year because of pesticides.” says Badjic. “This is also a serious problem that needs to be addressed.” While nowhere near as poisonous as nerve agents, pesticides play a long-term game, as they’re linked to illnesses such as cancer and Alzheimer’s disease.

“I would really like to see how [molecular baskets] operate in biological systems,” Badjic says. The team already confirmed that the nanoparticles work in urine; blood is the next environment to test, although testing individual solutions is still distant from full biological panels.

In the future, Badjic imagines hollow nanoparticles could both deliver the nerve-agent cocktail and collect the remnants to carry outside the body.

“I’m excited about the outcome,” says Badjic. “I just don’t want to get too far ahead.”