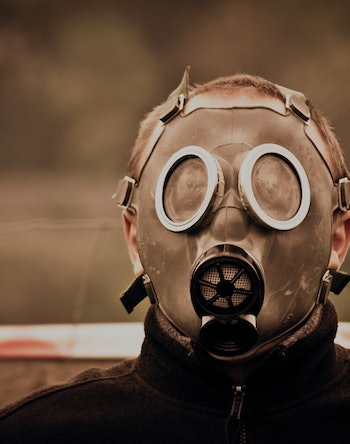 Terror on a Tokyo subway, 1995; attacks on Syrian civilians, 2013 and 2017; assassinations in an airport in Kuala Lumpur, 2017; attempted assassination in London, 2018. Tremors, foaming at the mouth, seizures, respiratory shutdown, sometimes death. What do these events have in common? Poisoning via a nerve agent — a chemical warfare substance that disrupts communication between the nervous system and muscles and organs.

A major concern for survivors of nerve agent poisoning is the potential for permanent brain damage caused by seizures. Because the brain cannot easily repair such damage, there is a critical need for an antidote that can enter the brain and reverse the early biochemical effects before harm occurs. Current antidotes, such as 2-PAM, the only FDA-approved reactivator drug in the U.S., cannot do this because it is unable to cross the blood-brain barrier, a layer of cells between the blood and the brain which prevents many chemicals, such as some drugs, from moving blood into the brain.

I am Janice Chambers, a toxicologist in the Center for Environmental Health Sciences in the College of Veterinary Medicine at Mississippi State University.

I initially worked on toxic responses in laboratory animals to organophosphate insecticides — a widely used class of crop protection chemicals. Organophosphate insecticides have a similar mechanism of action to nerve agents, but are much less toxic and are only approved by the US Environmental Protection Agency for uses that are not going to be harmful to humans or the ecosystem.

For the past eight years, my team has been developing antidotes that improve survival rates after nerve agent exposure, and we’ve shown the potential of our new molecules to enter the brain in tests with animals. If approved, these antidotes would give more confidence to both war-fighters and civilians that not only could their lives be saved but also their brain function could be preserved.

From Insecticides to Chemical Warfare

Because pesticides are so important to successful agriculture, my group was initially interested in toxic responses to organophosphate insecticides (OPs). My lab focused on the more biological effects, while my husband, Howard Chambers, synthesized chemicals useful to study the toxic effects of these insecticides.

OPs were originally developed as insecticides in Germany prior to World War II. This agricultural effort was co-opted by the Nazis to create the first nerve agents: tabun and sarin. Although these agents were not used during World War II and were banned by the Chemical Weapons Convention of 1997, they have been used occasionally in conflicts such as in the Iran-Iraq war.

However, scientists in some countries have continued to design even more dangerous OP compounds. The Novichok agents, suspected of being used in the attempted poisoning of former Russian double agent Sergei Skripal and his daughter, Yulia, for example, are estimated to be between eight and 10 times more potent than VX, one of the most toxic of the traditional nerve agents. These highly toxic chemicals are a danger not only to the military but also to civilians who may be exposed during terrorist attacks by assassins or rogue governments.

In 2010, the direction of my research changed course when one of my former Ph.D. students, who then worked in the Department of Defense’s Defense Threat Reduction Agency (DTRA), returned to MSU for a visit and mentioned that one of the military’s most pressing needs in warfighter defense was a brain-penetrating AChE reactivator.

During that conversation in a local sandwich shop, Howard pulled out his ever-present mechanical pencil and sketched out an oxime — a molecule that could “grab” the nerve agent and remove it from its target — that he thought would be able to cross the blood-brain barrier. The blood-brain barrier is an almost impenetrable layer of cells that make up the brain capillaries that prevent many foreign chemicals from entering the brain, particularly if they are electrically charged.

The former student was impressed and encouraged us to apply for funding from DTRA for synthesizing and testing a platform of novel oximes, based on the structure on that napkin. The oximes that we have invented in our lab are positively charged, like 2-PAM, but are less water soluble, which may prevent the brain’s transporters from exporting them out of the brain once they enter.

After initial successes, we are now supported by the National Institutes of Health’s CounterACT program, whose goal is protecting civilians from terrorist attacks or chemical accidents.

Nerve agents like sarin, VX, and Novichok are organophosphate chemicals, and they wreak havoc by inhibiting a critical enzyme in the nervous system called acetylcholinesterase (AChE). What AChE does for a living, so to speak, is to rapidly degrade acetylcholine (ACh), an important chemical that mediates precise and rapid information flow within the brain and to muscles and glands.

When AChE is inhibited, acetylcholine builds up and leads to inappropriate and massive stimulation within the nervous system, resulting in life-threatening symptoms: paralysis of the respiratory muscles, narrowing of the trachea, and excessive mucus production throughout the respiratory tract so that air cannot pass through.

This causes the foaming at the mouth that we see in news coverage of chemical attacks. Death usually results from respiratory failure. The incredible potency of the nerve agents makes them among the most poisonous synthetic chemicals ever produced.

In survivors, prolonged and repeated seizures caused by high quantities of ACh in the brain can cause permanent brain damage.

The antidote for OP poisoning has traditionally included artificial respiration and injections of the drug atropine, which helps the victim to keep breathing. In the US, medics also use an oxime reactivator — called 2-PAM — which restores AChE activity by removing the nerve agent; and benzodiazepine is used to suppress seizures.

The most effective oxime reactivators have a positive charge. But the blood-brain barrier which exists between brain cells and blood capillaries does a good job of blocking these charged chemicals from infiltrating the brain, either by preventing entry or escorting them out once they enter. Therefore, 2-PAM and other approved oximes do not reach high enough levels in the brain to reverse the deadly grasp of OP nerve agent.

To protect people from nerve agent poisoning, we need a brain-penetrating molecule to reverse the AChE inhibition. Our lab group and several others worldwide are attempting to create such an antidote that restores AChE activity in the brain following severe OP poisoning.

To date, several of our oxime drugs have been as good as or more effective than 2-PAM for increasing 24-hour survival for animals exposed to lethal doses of OPs, using highly relevant mimics of two nerve agents sarin and VX, as well as an insecticidal chemical in a laboratory animal model.

We have convincing evidence that our oximes can get through the blood-brain barrier and enter the brain after OP exposure, and that our laboratory animals show more normal activity of AChE with our novel oximes but not with 2-PAM. Our animals also recovered more quickly from seizure-like behavior with our oxime antidote compared to 2-PAM. Our lead oxime seems likely to remain in the brain, and it has prevented some damage to brain structures, while 2-PAM did not — a finding we describe in an upcoming publication.

This oxime platform has been patented by MSU and licensed by Defender Pharmaceuticals. Sadly, my long-term collaborator, Howard, passed away in December 2016; my team continues to pursue the research needed to develop his novel oximes into antidotes.

What value could these novel oximes bring to the arsenal of chemical weapon antidotes? Either alone, or in combination with 2-PAM, they could contribute to survival and, uniquely, they could reduce or prevent the brain damage caused by the prolonged seizures induced by OPs.

In other words, with our novel antidotes we could save lives and save brains.

This article was originally published on The Conversation by Janice Chambers. Read the original article here.