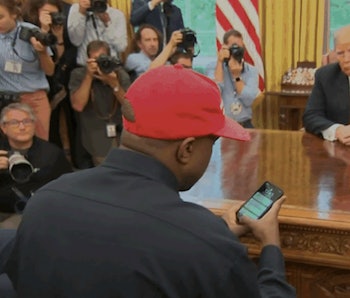 It’s still not exactly clear why Kanye West is so enamored with the science denying, race-baiting commander-in-chief. But fortunately, it’s only a matter of time before the truth gets out thanks to some noble iPhone hacker: My dude’s lock-screen password is literally 000000.

We know this because the Chicago rapper visited the Oval Office on Thursday to discuss topics ranging from prison reform to job opportunities for ex-cons. At one point in the meeting, Kanye wanted to show the president something on his phone, and proceeded to unlock it on live television. In short order, the whole world had an opportunity to grasp just how much Ye’s commitment to cybersecurity leaves to be desired.

All of this could have been easily avoided if he had used FaceID to unlock his phone. But, it seems that he either didn’t activate the facial recognition feature introduced with the iPhone X — or it simply didn’t work.

The musician’s ensuing rant left the President speechless as well as many onlookers, making Kanye’s dumb-ass password the photo-op’s main takeaway. One viral tweet amassed more than 39,000 likes, 12,000 retweets, and almost 800 replies at the time of this writing.

Unfortunately, West is by no means the only person guilty of such irresponsible cybersecurity habits. Security management company SplashData publishes an annual list of that year’s worst passwords. The firm accessed that data from credentials that have already been compromised and are floating around online. SplashData estimates that almost 10 percent of people in North American and Western Europe have used one of the 25 worst passwords. These include hits like “Password” and “123456.”

Surprisingly, Kanye’s choice of 000000 wasn’t even on there, so maybe we are being a little hard on him (putting aside the whole ‘password on national television’ thing).

Still, take this snafu as a lesson: Make your password an inside joke you have with a friend, the name of the street you grew up on, or your dog’s name. Names and phrases are incredibly difficult to guess and impossible for you to forget.

This way it’ll be harder for hackers to guess, better for your personal data, faster to remember, and stronger overall.

More like this
Innovation
16 hours ago
Look: This tiny robot could change medicine forever
By Katie MacBride
Innovation
Sep. 26, 2022
This sound-powered underwater camera could reveal deep-ocean secrets
By Molly Glick
Innovation
Sep. 25, 2022
ePlane? Electric planes may come sooner than you think
By Gökçin Çınar and The Conversation
Share: