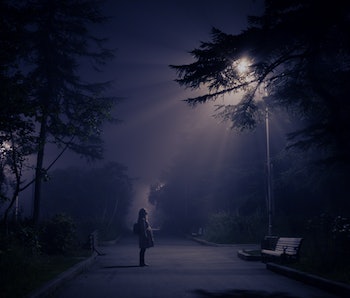 You’re driving alone down a dirt road, and you’re falling asleep at the wheel. Suddenly, a burst of light streaks across the sky — there’s a floating, flat shape in the air right in front of your truck, and though it soared quickly into view, it seems to have stopped completely. A beam of light shoots out from underneath the craft, and a little man with huge eyes, an enormous head, and a tiny body appears in the middle of the road. He doesn’t want to hurt you; he just wants to stick a probe in your nasal cavity.

Why does this alien encounter story feel predictable and familiar? If humans have never encountered extraterrestrial life, then how did we decide across cultures that aliens have an instantly recognizable shape? If you visit the UFO Festival in Roswell, New Mexico, it becomes immediately clear that humans have decided on a visual shorthand for alien life: the flying saucers, the little green men with huge black eyes, three fingers, and medical probes. But where did these cliches come from?

In the “believer” community, common threads that connect the stories of “close encounters” include certain types of aliens, spacecraft, and the phenomenon of lost or frozen time. Inverse reviewed first-hand accounts of encounters with alien life to find commonalities, and these were the four most popular descriptors we came across.

Non-believers often call extraterrestrials “little green men,” which is a reference to the commercialized, cartoon version of aliens. Truthfully, most people who profess to having had close encounters of the “third kind,” meaning contact with another living organism not from Earth, say the alien they met was gray.

Gray aliens — who are otherwise exactly as you’re imagining them, with big foreheads, tiny chins, bodies, and large black eyes — are understood among believers to be the most common. Or, at least, they’re the ones most likely to visit us here on Earth.

In fact, according to research compiled by author C.D.B. Bryan in his 1995 book Close Encounters of the Fourth Kind: A Reporter’s Notebook on Alien Abduction, UFOs, and the Conference at M.I.T., 43 percent of reported encounters with aliens describe the figure the same way. People have described the grays as having a host of different personalities, temperaments, and objectives, but among this subsection of encounters, a few things hold true. The grays are always silent, they are always intelligent, and they almost always appear in groups.

Of course, there’s the enduring question of who beat whom to the “grays” archetype: believers or pop culture. If we consider science fiction literature as the origin point of these “grays,” then H.G. Wells is the inventor. In 1893, Wells described alien beings in a short story as “gray-skinned beings who were perhaps one meter tall, with big heads and large, oval-shaped pitch-black eyes.” In a serialized novel he wrote in 1901, Wells used this same description for his invented inhabitants on the moon.

The next time this specific type of alien appeared in pop culture, it was in the collected accounts of witnesses to what’s now called the 1947 Roswell Incident. Despite not being acquainted with each other before the incident, most of the people who reported seeing aliens in Roswell after the crash described them almost exactly the way Wells had.

Despite having originated in a science fiction story, the grays are collectively considered a definitive part of the conversation about alien life. At the UFO Festival in 2016, speakers on panels repeatedly referred to “the grays” as the most agreeable and least aggressive “type” of extraterrestrial that appears in witness reports.

3. The Study of Humans by Aliens

It’s very rare for a witness who professes they’ve made contact with alien life to say they were outright attacked. Perhaps because violent encounters would yield physical evidence — bruises, broken bones, signs of forced entry into one’s home — most people who say they were abducted or contacted by extraterrestrials describe aliens carrying out a calm, medicinal, and sometimes invasive form of study.

That means humans tend to agree on the narrative that aliens might have visited the Earth simply to study our bodies and culture. Of course, several times throughout his life, Stephen Hawking expressed his worry that extraterrestrial contact would cast the inhabitants of the Earth as vulnerable. After all, if an alien civilization were able to find Earth and travel to us, that means their technology would already outpace ours. “One day, we might receive a signal from a planet like this,” Hawking said in 2016, referring to a potentially habitable planet known as Gliese 832c. “But we should be wary of answering back. Meeting an advanced civilization could be like Native Americans encountering Columbus. That didn’t turn out so well.”

2. The Government Knows About These Aliens

Ever since the local government blamed the Roswell incident on a weather balloon, believers had maintained that the United States is fully aware of past run-ins with extraterrestrials. Most imagine a situation much like the one that plays out in 1996’s Independence Day, in which the president (Bill Pullman) is only told about the nation’s history of third-kind encounters when tensions between humans and aliens become untenable.

In 2014, Foreign Policy reported the US government had a contingency plan in place just in case a zombie apocalypse were to erupt, and paranormal theorists took that opportunity to investigate the government’s policy for alien life.

While the governments of the world have reportedly played around with loose post-detection policies for extraterrestrial life — tell the United Nations, share all available data, and maintain full transparency with the rest of the world — none have gone public with their plans.

When it comes to the theory that the American government knows about extraterrestrial life, hasn’t told its citizens, and is currently hiding proof, the nucleus of the conspiracy is Area 51 in Nevada. Many have claimed to have spotted evidence of alien life on the desert government property, but as far as we know, it’s only been used for experimental weapons development. That’s a creepy enough fact on its own.

1. A Flat Saucer Making Hair-Pin Turns Is Something That Happens

According to the world’s largest network of alien “believers,” the Mutual Unidentified Flying Object Network (MUFON), reports of alien encounters have made it clear that any visitors to Earth possess technology far more advanced than our own. Admittedly, if one were to search through MUFON members’ uploaded, original drawings, which they commission from those who say they’ve met aliens, there are noticeable similarities.

For whatever reason, believers don’t tend to say that alien spacecraft look like the rockets humans habitually send into the atmosphere. They’re never sitting in cars, either.

According to most eyewitness accounts, they look more like stealth drones, ranging in size from an entire football field to a single kayak. If they’re not completely smooth and saucer-shaped, they’re usually triangular in shape, and they almost always bear flashing lights.

Find out how The CW imagines alien life in Roswell, New Mexico – Tuesdays at 9/8c.