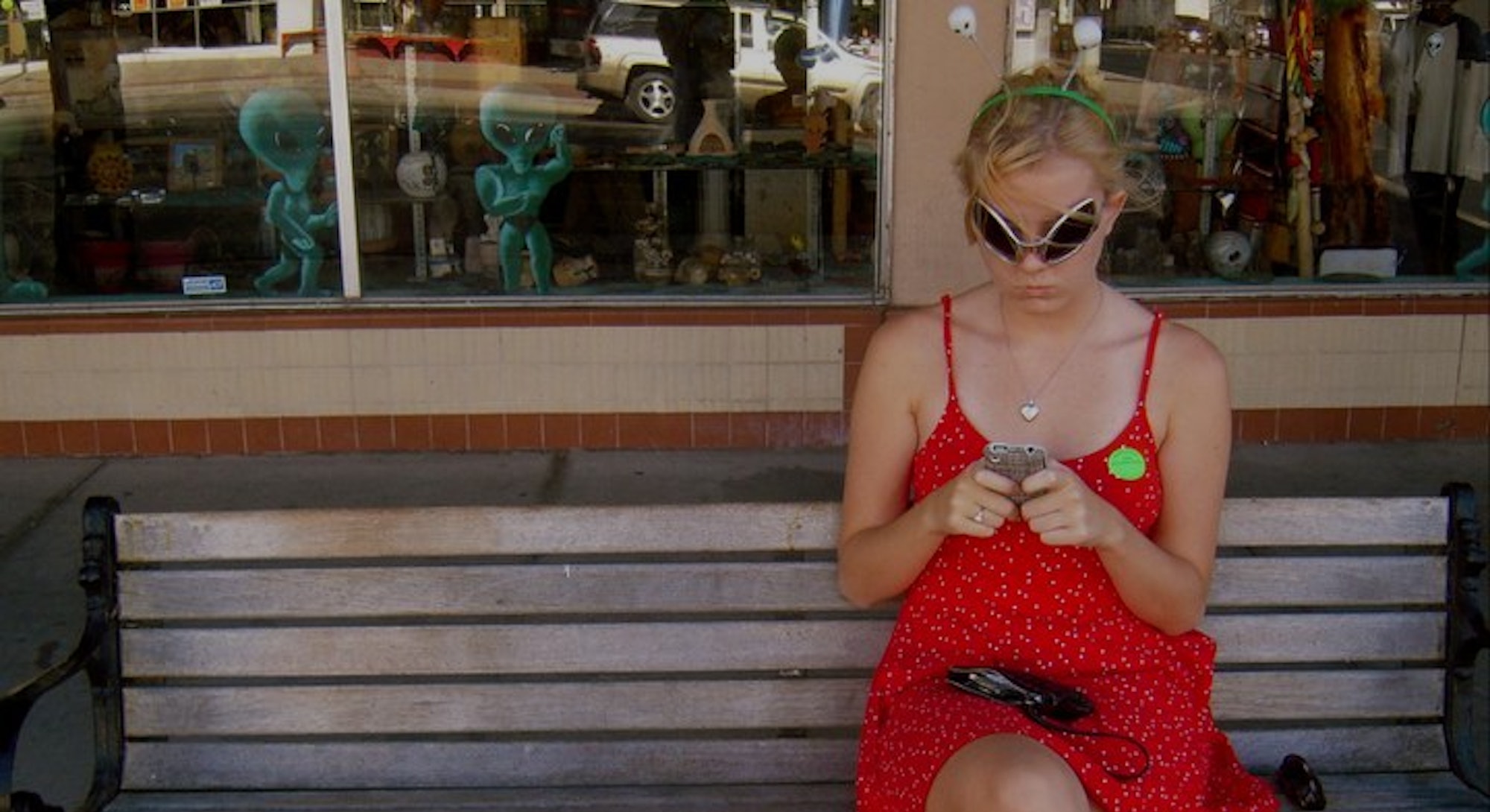 Roswell, New Mexico is about three hours south of my parents’ home in Albuquerque. The trip between cities cuts through a wasteland of red sand, and I40 is punctuated by a handful of Podunk towns — Moriarty, Vaughn — whose inhabitants make monthly, several-hour-long trips to Walmart for provisions. New Mexico fancies itself the “Land of Enchantment”, and Roswell is its southernmost fever dream (discounting Las Cruces), where enchanted fans of American kitsch and truly deranged victims of “extraterrestrial abduction” gather annually for the UFO Festival. I have witnessed this event enough times to make several conclusions on the way we talk about aliens – just North of the border.

The most fascinating part of the UFO Fest is the friction that occurs between true believers and the goofy tourists who drove into Roswell expecting a family friendly craft fair. The Fest straddles the line between satisfying believers and tourists as best it can, but it’s no Jean Claude Van Damme.

Both groups are equally committed to attending the Fest, and their sub-events don’t really overlap. It’s easy to stumble between the kids’ costume contest at Roswell High School and the support group for former abductees, which is held in a windowless room on Main Street. I’ve been to both, and they’re equally enthralling.

The costume contest pits face-painted children against dour, adult cosplayers, and every competitor lines up onstage to have their get-ups analyzed. I’ve seen Invader Zims, E.T.s, Transformers and classic little green men – but, disappointingly, never the guys from Earth Girls Are Easy.

Though they compete in separate categories, the children and adults line up backstage at the local high school, sipping water through their foam masks and shuffling around until their numbers are called. On one occasion, I tried to infiltrate the group to take photos, but I was quickly ushered back into the auditorium by an angry woman wearing sparkly antennae.

The auditorium offers an escape from Southwest heat, which any local will insist is preferable to the rest of America’s weather, given that “it’s a dry heat, not muggy.” The costume contest in 2012 also featured a talent show, in which a group of elderly women shuffled onstage and performed painfully simple choreography to songs featuring the word “alien”.

In my memory, that dance went on for three hours. I also remember someone’s baby, painted blue and sitting in a stroller mocked up to look like a UFO, being the crowd favorite. In our heat delirium, we started to chant in support of the blue baby. I don’t remember it going over well, but then, that’s the UFO Festival, where everything’s funny but no one’s in on the joke.

The dead serious side of UFO talk

There’s no reliable way to count how many people walking among us believe they’ve come in contact with extraterrestrial life, but at the UFO Fest, those people are the majority. A huge crowd gathers to swap stories and listen to experts on alien-related subjects ranging from SyFy programming to the actual classification of alien types witnessed by believers.

While those who reference “watchers” usually describe feeling paranoid — the “watcher” concept argues that aliens have always been among us, and that they simply observe human behavior without interfering — most believers in Roswell are particularly transfixed with “reptilians”, which the guide below (published at the UFO Museum) calls “Mantis”.

An often repeated phrase at the Festival is, “Reptilians act as bodyguards.” I heard this multiple times, from guest speakers and random believers sorting through novelty t-shirts, as if everyone in the entire town had agreed upon a single thing regarding extraterrestrials. Not only do they definitely exist, but their social structure decrees that reptilian aliens are without empathy and often assigned physical tasks, like protecting the UFO.

One particular guest speaker, Travis Walton, who presented his experiences with aliens at my last visit to the Fest, maintained that extraterrestrials abducted him temporarily, back in the 70s. Colloquially, run-ins with aliens are typically referred to as “incidents”, as in the “Roswell Incident” on which the Festival is based. In 1947, an unidentified aircraft crashed just outside Roswell. Though the government called the craft a “United States Air Force surveillance balloon”, a strongly willed group of dissenters alleged that it was, in fact, an extraterrestrial ship that was later hidden in Area 51. The “Roswell Incident” is canon in the town today; the documents released regarding the crash are damn near scripture.

There is a particular sensation that accompanies visiting Roswell, a sort of prickly discomfort mixed with excitement, and that feeling was live and loud while I watched this man speak. When he cleared his throat into the mic to begin, I saw the woman next to me clutch her copy of The Walton Experience, Walton’s autobiography, which was adapted into a film called Fire In the Sky.

Walton asked the crowd, which included my sister and me, to raise our hands if we had ever seen an alien. Almost every single person in the room raised his or her hand – except my sister and me. “That’s great,” he said, “now keep your hand up if you’ve been on board an alien ship.” I cannot emphasize enough how strange it was to see maybe 10, 20 hands remain in the air, each hand leading down a trembling arm to a distraught-looking person. Aliens, I came to realize visiting Roswell, stop being a fun concept once a person believes they’ve been abducted.

People who come to Roswell seeking answers to what they believe are questions borne of actual alien contact do not typically wear the kitschy, gift-shop clothing available on every street corner. A true believer wouldn’t wear the t-shirt I bought, for instance, as an alien-themed Mexican restaurant which says, in glow-in-the-dark letters, “Our Tacos Are c-ALIEN-te!” A true believer makes the pilgrimage to Roswell, America’s alien mecca, to commune with those who believe them. They just happen to hold their somber support groups in the same town, on the same day, as the fun family light parade.

The 2016 UFO Festival is happening again this summer, from June 30th to July 3rd. Though I won’t be in attendance, I have noted that the guest speaker line-up still includes Travis Walton, alongside actors, scholars and those who profess to have communicated with extraterrestrial life.

It makes perfect sense, culturally, for the UFO Festival to occur annually in New Mexico, a state marked by both the mixing of cultures — Mexican, Native American, white Megachurch-attending bible thumpers, hippies who want to live out Georgia O’Keeffe’s dream — and a dreamy sensibility that evades calling anyone’s opinion “incorrect”.

It’s not like a New Mexican to call her neighbor crazy, so Roswell’s annual event continues on, both satirical and earnest in its construction. Even if you haven’t been on board a UFO and aren’t looking for a community of fellow abductees, the Fest is worth visiting for the Alien Pet Costume Parade alone.