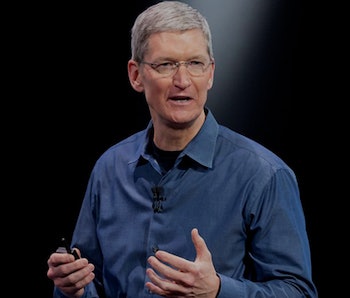 Around 30 major United States tech companies, including Apple and U.S. government contractors were all allegedly hacked by China in 2015, according to a Thursday cover story in Bloomberg Businessweek. If true, the bombshell report of malicious chips making their way from Chinese suppliers into the hearts of America’s most powerful companies threatened upend the global supply chain.

More specifically, and citing government sources, Bloomberg reported that the Chinese government planted tiny, “malicious chips” inside of the motherboards of Super Micro Computer servers to siphon intelligence from government agencies and lift trade secrets from companies. Super Micro Computer is a leading supplier for server components worldwide and outsources assembling to Chinese companies, which is how Bloomberg explains the Chinese military was able to bug servers destined for the U.S. and Apple. On Thursday evening, Apple fired back.

“Apple has never found malicious chips, “hardware manipulations” or vulnerabilities purposely planted in any server,” wrote the company in a statement.

The story dates back to 2013, when Apple began working on a project codenamed Ledbelly with a goal of improving speed of Siri’s search functionality, after it acquired a startup named Topsy Labs. This undertaking required thousands of new servers across the company’s offices around the globe, which Bloomberg reports it purchased from Super Micro.

The publication stated that Apple was using 7,000 of the company’s servers before it became aware of the hardware compromise. All these claims were refuted by Apple.

“Siri and Topsy never shared servers; Siri has never been deployed on servers sold to us by Super Micro; and Topsy data was limited to approximately 2,000 Super Micro servers, not 7,000. None of those servers have ever been found to hold malicious chips,” stated Apple in response.

Apple claims it would have admitted to such a hack and cooperated with the law enforcement.

More like this
Innovation
8.15.2022 8:30 PM
This high-tech camera may help protect our identities — here's how it works
By Molly Glick
Innovation
8.11.2022 11:00 AM
“Quantum materials” could give the human brain a run for its money, scientists say
By Nathaniel Scharping
Innovation
8.14.2022 10:00 PM
60 years ago, an iconoclast designer revealed a fix for our biggest tech problem
By Tim Gorichanaz and The Conversation
Related Tags
Share: