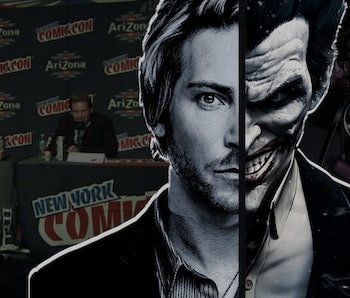 Five years ago, Troy Baker sat in front of thousands at New York Comic Con. They were not happy to see him. But mere few minutes later, Baker would be greeted with rapturous, thunderous applause.

“It wasn’t that I wanted to prove something,” Baker tells Inverse at RTX 2018 in Austin. “I just didn’t want to prove them right.”

In 2013, Baker appeared in person with WB Games Montréal to hype up Batman: Arkham Origins, a prequel to the mega-successful Batman: Arkham series. Set before the first game, Origins followed Batman in one of his first encounters with arguably his most famous villain, the Joker.

And Baker, a musician from Texas who “fell” into a prolific career as a video game voice actor, landed the role of a lifetime as the Joker. But the big role came with big expectations, not the least of which involved following in the direct footsteps of the legendary Mark Hamill.

Next to Luke Skywalker, Hamill’s performance as the Joker, beginning with the Emmy-winning Batman: The Animated Series, is regularly regarded as the benchmark in adapting any comic book character to another medium.

“He’s my Joker,” Baker admits. “When I see the Joker, when I read The Killing Joke, that was the voice that was in my head. There was something Mark did where it was like, ‘You’re dangerous.’ He moved the character.”

Fans can be precious and protective over what they believe are the “right” versions of their favorite characters. So it was a hard pill to swallow for many when Baker was hired to replace Hamill for the new game.

There were no harassment campaigns or petitions against him (how unfortunate what fandom has become half a decade later), but everyone — including Troy Baker — knew the fans had to be won over.

“Eric was like, ‘These people came to hear you do this. Give them what they came for,’” Baker recalls, imitating Holmes’ Scottish accent. “He’s like, ‘What do you wanna read?’”

Baker chose the grandaddy of all Joker monologues: A passage penned by Alan Moore from his seminal one-shot The Killing Joke, a comic from 1988 that continues to influence Batman media today. At the panel, Baker said he chose it, because “To me, it’s one of the best cross-sections of who the Joker is.”

“So [Eric Holmes] set me up beautifully,” Baker remembers, “and the first line, ‘Memories can be vile…’ There’s silence. I’m like, this is it. I’m done.” But Baker kept going. “It wasn’t until I did the laugh that I heard the applause.”

Immediately after, fans and critics showered Baker with praise over his Joker. “The New Voice Of The Joker Killed It At Comic Con,” read the headline of a Kotaku report. A YouTube video of Baker’s reading went viral (at least among comic book readers and gamers), and today the video sits at over 2.1 million views. Scroll to the comments — which you should never do — and you’ll see differing versions of “Holy shit.”

Listening to it now, you can tell that fans were won over from the start. A faint “Whoo!” can be heard if your headphones are loud enough. With over a decade of experience in the voice acting industry, it’s hard to fathom Troy Baker would be nervous. But five years on, he tells Inverse he was.

“I was afraid I would somehow hurt the character,” he says. “And the reality is, that would hurt my career.”

Many also noticed how his Joker bears a strong resemblance to Hamill’s performance. But imitation was not the goal.

“I didn’t want to be an imitation,” he says. “People are like, ‘Great Mark Hamill impersonation!’ That wasn’t the goal. The goal was for you to believe that you were looking a a younger version of the Joker you’ve known.”

As for that moment five years ago inside the Javits Center, Baker thinks about that moment not as a victory over cynical fans, but as a moment of relief. “I thought, maybe we’re gonna be okay.”