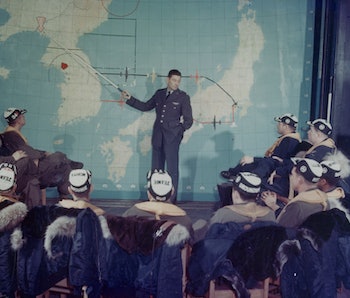 On September 3, 2017, North Korea tested a nuclear bomb 17 times larger than the one that leveled Hiroshima, sending ripples of alarm across the world. More than just raise the eyebrows of policy makers, the blast also piqued the interest of experts at Columbia University’s Lamont Doherty Earth Observatory, who show in a new paper that that last September’s nuclear test may be responsible for up to 13 aftershocks over the past year.

While it’s still unlikely that a nuclear test could cause a massive earthquake, the researchers at Columbia released two papers showing that identifying 13 high frequency tremors that have traveled through North Korea, following the September test. The earliest one rumblings occurred just eight minutes after the initial nuclear test (not included in the aftershock count) but was later followed by two more later that month, and another on October 12th. In December there were five more, and they continued into 2018, with four in February and finally one on April 22nd.

But the issue, explains Won Young Kim, Ph.D, the lead author of the paper titled Identification of Seismic Events on and Near The North Korean Test Site After the Underground Nuclear Test Explosion of 23 September 2017, is that while the world knew these tremors existed, they weren’t sure exactly why they were happening. At the time, some analysis identified these tremors as evidence that North Korea was testing more nukes on a smaller scale.

“North Korea has conducted six nuclear tests, but the latest one was huge. That’s what we’ve analyzed the signals from.,” Kim tells Inverse “The question was are explosions or were they earthquakes?”

Kim’s paper, published The Journal of Seismological Letters in conjunction with another authored by associate research professor at Columbia David Shaff, Ph.D., suggests that not only are not only are these tremors are actually earthquakes,they’re tightly grouped along a fault line where there will likely be more events like them in the future.

To try to find out whether these shakes were organic or the result of nuclear testing, Kim analyzed two major wavetypes found in geological data. When the earth shakes, due to an explosion or not, the first rumble to roll by is called an “P-wave” or primary wave, because it’s typically the first wave to get picked up by monitoring stations, traveling around 6 kilometers per second.

The P-wave, Kim explains, This are usually created by whatever traumatic event actually caused the earthquake. It might be the explosion of a giant nuke, or two plates hitting one another underneath the earth’s surface. However, both explosions and earthquakes generate P-waves, so to figure out which is which, you have to go one step further and look at the “S-wave” or that follows it. The S-wave, or “secondary wave” is often caused by “shear motion”, or when particles move up and down in relation to the P-wave as the earth continues to move as a consequence of that initial event.

This key relationship between these waves is called the P/S spectral ratio. This has been around for decades, but Kim was able to use this metric in a series of more complicated models that illuminate each component of each tremor in detail. When he did this, he found that the P/S waves for these tremors looked a lot more like earthquakes than explosions.

Schaff adds that this analysis alone wasn’t completely sufficient. He also introduced a method of calculations that visually compares the wave forms of each event to previous events and calculates their similarities. He used this method, called “waveform cross correlation” to check Kim’s work and identify one event, called “event 8” (6:13 am on December 9th 2017) that had stymied him.

Both researchers now believe that at least three tremors that were once classified as explosions were actually earthquakes, including two that followed the September 3rd test. In particular Schaff’s paper highlights one detected on September 23rd at 8:29 UTC, and another on December 9th at 6:13 UTC, otherwise known as “event 8”,

“There have been about three events at the North Korea test site that we feel were misclassified,” Schaff says. “No method is 100 percent certain, but combining the two methods I was able to say with a very high probably of certainty that these were earthquakes.”

The Consequences of September 3rd 2017

Thankfully, these results suggest that North Korea isn’t testing bombs as frequently as we might have believed. But these authors suggest that there still could be something going on underneath the surface as a result of the September 3rd explosion.

Using the data provided by Kim, Schaff was able to find that these tremors were clustered along a unified path. There, he found that what had originally looked like a random spattering of explosions and earthquakes over 5 kilometers, was actually clustered within about 700 meters of one another near North Korea’s Chinese border.

Kim suggests that this activity around the fault line can actually be traced back to that initial explosion in September of last year. “It’s not 100 percent sure, but I think somehow that the nuclear test was so large that it triggered these small seismic events to the north of the area,” he says.

This will warrant further investigation, but for now, it appears that North Korea’s testing has altered the landscape at least near the surface. In April, Kim Jong-Un announced that they would stop testing nukes in their mountainous hideaway beneath Mt. Mantap. That test likely caused a number of their underground tunnels to collapse beneath the mountain. But other studies suggests this continued testing has also blown bits of Mt. Mantap to smithereens, making it a non-useful test site.

But should they start testing again, Schaff adds that he’s eager to continue the project: “it’s nice to be working on something that affects the state of the world we’re living in,” he says. “This is more than just knowledge for knowledge’s sake.”

More like this
Science
8.6.2022 5:00 PM
Earth is spinning too fast — the consequences for timekeeping may be unprecedented
By Andrew Moseman
Science
8.5.2022 2:30 PM
A tiny meteorite holds interstellar material from a distant supernova
By Kiona Smith
Science
7.29.2022 10:00 AM
Which animals get Covid-19? A new database tracks cases around the world
By Jennifer Walter
Related Tags
Share: