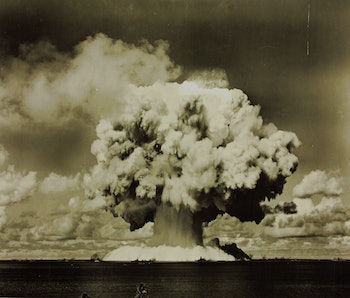 There’s reason to be nervous that North Korea will make good on its recent threat and drop a hydrogen bomb somewhere over the Pacific. The country’s government already claimed to have tested one in early September, and if the comments of North Korean foreign minister to New York reporters on Thursday are to be taken seriously, there may be another one coming.

Rumors that said hydrogen bomb could cause an earthquake, however, aren’t quite as believable.

“It could be the most powerful detonation of an H-bomb in the Pacific,” said Ri Yong Ho in response to President Donald Trump’s latest tirade against North Korea. He’s certainly right that it will be powerful, considering how much stronger a hydrogen bomb is [than an atomic bomb, and that the device tested on September 4 was was almost seven times more powerful than the deadly bomb the U.S. dropped on Hiroshima in 1945.

Sure, an explosion of that scale may feel like one. But it is near impossible that it will be so powerful that it will literally cause an earthquake.

The September 4 explosion registered on the Richter scale with a magnitude of 6.3, according to the U.S. Geological Survey. (For comparison, Mexico City’s two most recent earthquakes had magnitudes of 7.1 and 8.2, which devastated the city.)

But scientists say that it’s very unlikely (some say impossible) that this nuclear test — or any nuclear testing done in the future — would actually trigger a natural earthquake. That’s because the mechanisms by which they make the earth shake are fundamentally distinct. The differences in the way explosions and earthquakes originate and how their shock waves move illustrate how such a situation would be highly improbable, the USGS explains.

For one thing, explosions and earthquakes act at different depths of the earth. While earthquakes originate in the shaking and scraping of tectonic plates deep below the ground, nuclear devices are placed in relatively shallow craters, just deep enough to avoid releasing dangerous radioactive materials into the air.

Earthquakes and explosions also move in different ways. Nuclear explosions produce strong primary shock waves, then weaker waves at the surface. Earthquakes perform in an opposite way, weaker primary waves followed with powerful waves closer to the surface, which cause the shaking felt on the ground level.

Essentially, shallow nuclear testing doesn’t cause movement deep enough in the earth to trigger a natural earthquake — unless there’s a mishap or something goes wrong. A rare example is a tsunami that was triggered in 1979 in French Polynesia after the French accidentally detonated a nuclear weapon, according to a 2011 report by an anti-war advocacy group. Barring that, examples of a nature-made earthquake resulting from nuclear testing are not widely reported or easily found.

This doesn’t mean nuclear tests don’t have other major environmental impacts. Satellite photos from the analysis group 38 North show “numerous landslides” and “surface disturbances” in the aftermath of North Korea’s test on September 4.

The population around the test site in North Korea is also put in danger. Exposure to radioactive materials from nuclear testing can cause significantly higher rates of various cancers and birth defects in people and destruction of animal species and bodies of water, as seen as a result of France’s nuclear testing in the 1970s.