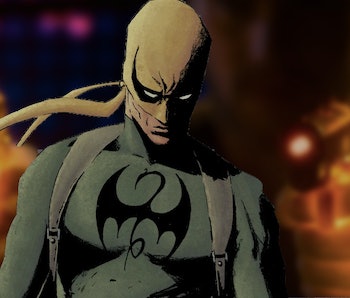 The Immortal Iron Fist is hitting the road. In the Season 2 finale of Marvel’s Iron Fist on Netflix, the scope of the series opens up far beyond Manhattan. And while the universe-wide ramifications of Avengers: Infinity War haven’t effected this corner of the Marvel Cinematic Universe (yet?), Danny Rand’s world is still about to get blown wide open.

After finishing Davos (Sacha Dawan) and dealing with Mary Walker (Alive Eve), Danny Rand (Finn Jones) and Ward Meachum (Tom Pelphrey) are abroad in Asia. While Colleen Wing protects New York with her newfound powers, Danny Rand is “dual-fisting” it everywhere from Hong Kong to Jakarta to (as we see in the final scene) Hokkaido, Japan.

As Danny seeks to learn more about the powers of Iron Fist, he’s also tracking down one person Marvel readers will recognize: Orson Randall.

In the comics, Orson Randall was Danny Rand’s Iron Fist predecessor who escaped K’un-Lun and used his powers in service during World War I. (Yeah, he looks pretty good for someone his age.)

Originating from The Immortal Iron Fist written by Ed Brubaker and Matt Fraction, Orson Randall was the son of an American pilot who was taken in after their ship crash landed in K’un-Lun. Trained by Lei-Kung the Thunderer, Orson became Iron Fist after fighting Shou-Lao. But when Orson was forced to fight in the Tournament of Seven Champions, he refused and escaped with a tome containing the written history of the Iron Fists. Years later, Lei-Kung found Orson, but opted not to bring him back, and declared him dead.

Notably, Orson was 33 years old, an age where most Iron Fists die.

After escaping K’un-Lun, Orson went on a ton of bomb-ass adventures in the 20th century. Accompanied by his biographer, Orson formed World War I-era superhero groups like the Confederates of the Curious (don’t… don’t worry too much about the name). He then met and trained a young Wendell Rand, who would grow up to become a billionaire magnate with his own son, Danny. You can guess how the story proceeds from there.

With Orson involved next season, it’s curious if that means the return of K’un-Lun. In the comics, Orson connects with Danny before he’s summoned to the Tournament of Seven Champions in K’un-Lun. Elements of the tournament appeared in Season 1 of the Netflix series, but hopefully, next season will show an ancient kung fu tournament with the visual, epic grandeur it deserves.

Either way, that weird part where Danny is dual-wielding two guns with his Iron Fist powers, you can thank Orson for that. That was his thing.