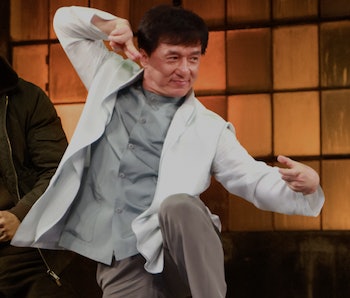 In a conversation with Decider, Henwick (“Colleen Wing”) and co-star Finn Jones (“Danny Rand”) unpacked their big fight scene against a bloodthirsty Triad gang during the first episode of Season 2, taking place inside the back kitchen of a Chinese restaurant. As Henwick explains, she trained by watching classic Jackie Chan because of the legendary action star’s famous use of props and improvised weapons.

It’s true. Throughout his career, Chan famously choreographed fight scenes unique to each film. And one way he did that was through using special props and designing fights around them, ensuring the movie is unforgettable and not indistinguishable from every other fight scene in another movie. Check out 1996’s Police Story 4: First Strike, where Jackie Chan uses a metal ladder in ways you never think a ladder should be used.

Henwick continues: “So with that kitchen fight, there were moments I would ask the stunt team, ‘What would Jackie do? He picks up this pan, what would he do?’ It’s a different style of fighting in that it’s fun. That’s what Jackie is so good at. He is the everyman, just getting attacked on all sides and it’s fun, and that’s what we wanted with that Episode 1 fight.”

Iron Fist Season 2 still has its faults (check out our review), but the fight scenes are far and away better than they were last season.