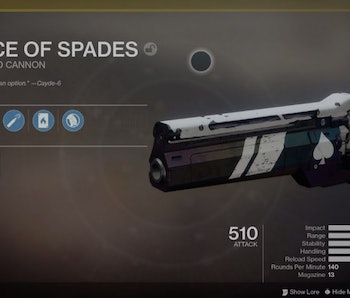 You probably remember the Ace of Spades from the original Destiny game, where it served as Cayde-6’s trusty hand cannon and could also be used exclusively by Hunters. Destiny 2: Forsaken begins by killing off the popular character (voiced by Nathan Fillion). That may sound like bad news, but it also means the Ace of Spades is up for grabs yet again. And this time anyone can wield it, as long as they’re willing to do a little work.

Before we jump into the Ace of Spades quest in Destiny 2: Forsaken, here’s what you need to know about the weapon itself. According to [GamesRadar*], the Ace of Spades offers two special perks. The first, called Memento Mori, gets you extra bullets when you reload shortly after scoring a kill. The second, Firefly, creates an explosion whenever you land a precision hit.

That all sounds pretty great, but actually getting your hands on the Ace of Spades is going to take a lot of effort. For starters, you’ll need to complete all 11 new story missions in Destiny: Forsaken 2, which means grinding past 400 power level. Also, make sure you talk to Banshee at the Tower after finishing your first mission to set up the Cayde’s Will quest later on.

Once you’ve finished the main campaign from the new expansion you’ll get the Ace of Spades. Unfortunately, Cayde-6’s exotic weapon is busted. To fix it, you’ll have to head back to Banshee and start the Cayde’s Will quest, which involves a series of extra challenges you’ll need to complete using any hand cannon weapon:

Once that’s done, head back to Banshee to use the data you’ve collected to fix the Ace of Spades. However, you’re still not finished yet.

Next, you’ll need to track down some of Cayde-6’s personal caches containing the parts needed to make those repairs, which will be difficult now that he’s dead and can’t sell you a map. Thankfully, those treasure chests are in the same spots they’ve always been so if you remember where they were you’re golden. If not, here’s a guide.

Finally, go to Titan and begin the Ace in the Hole quest, which has you search the planet for 10 additional caches. You can find them all on your map, so this shouldn’t take too long. With that done, head back to the Tower and Banshee will hand over a working Ace of Spades.