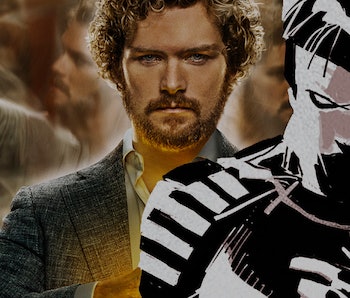 Danny Rand might have another superhero to pow-wow with in Season 2 of Marvel’s Iron Fist on Netflix, streaming on September 7. Samuel Chung, who debuted in the pages of Charles Soule’s Daredevil in 2015, will be played by Yale School of Drama alum James Chen in the new season.

But just who is Samuel Chung? And will he have as big a role in Iron Fist as he did in the comics? If he does, fans should be prepared for a hell of a story. And don’t worry, there are no spoilers for Iron Fist Season 2 ahead.

Comparatively speaking, Samuel “Sam” Chung is a very new character. First introduced in 2015 in the one-shot issue All-New, All-Different Marvel Point One #1 before co-starring in Charles Soule’s first volume of Daredevil, Sam is an undocumented Chinese immigrant with an invisibility suit — which he built out of cheap, over-the-counter tech from a bodega — who fights crime as the superhero Blindspot. He was co-created by Soule and illustrator Ron Garney.

Trained in gymnastics in his native China before coming to the states, Sam worked late nights as a custodian at Columbia University. While there, he was able to secretly study and attain a genius-level proficiency at engineering, which allowed him to build his super suit. Because of his illegal status, he couldn’t file a patent, so he became a superhero instead.

In Daredevil, Matt Murdock trains Blindspot (just like Stick did for him). Together they fight bad guys like the mystical crimelord Tenfingers, who lured Sam’s mother into his dark church, and the serial killer/artist Muse.

It was in a fight with Muse that Sam lost his eyesight after Muse gouged out his eyes. But with the “help” of The Hand, Sam’s eyesight was restored, except “everything looks so dark.” How ominous.

There’s little of Sam Chung previewed in Iron Fist Season 2, which is a strong indicator that he may not become an important, badass superhero like he is in the comics. Still, being that he’s new to the Marvel Universe, it’s only a matter of time until before fans start yearning for Blindspot to actually show up in the MCU.

If they can see him, that is.