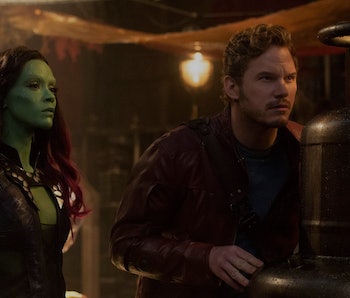 Most Marvel fans assume Avengers 4 will involve some kind of time travel thanks to previous set photos showing several heroes who travel back to the events of the first Avengers movie. But now, there’s convincing evidence that characters could travel back to the first Guardians of the Galaxy movie as well.

Over the weekend, redditor SuperheroNick posted on the /r/MarvelStudios subreddit, having noticed a peculiar costume discrepancy. In December 2017, actress Zoe Saldana, who plays the green alien Gamora in Guardians of the Galaxy, posted a behind-the-scenes video on Instagram of herself getting her makeup adjusted as the character.

Supposedly, this was taken while filming for Avengers 4, which matters for two different reasons. Not only is Gamora dead by the end of Infinity War, but she only wears this specific costume in the first Guardians of the Galaxy movie. By vol. 2 and Infinity War, her costume has changed.

Note the specific silver plates embedded in the vest.

If Avengers 4 shows Gamora circa 2014, then that means there could be either a flashback or straight-up time travel to the events of Guardians of the Galaxy vol. 1. Most popular Avengers 4 theories assume various heroes will time-travel back to the events of previous movies to claim each Infinity Stone for their own Infinity Gauntlet, so maybe they’ll travel to Guardians of the Galaxy vol. 1 to claim the Space Stone and encounter Gamora in the past.

But there’s yet an even crazier theory that could explain how Gamora is in Avengers 4.

There are set photos taken at Durham Cathedral for Avengers 4, indicating that Thor, Rocket Raccoon (Bradley Cooper), Valkyrie (Tessa Thompson), and Hela all wind up at the same building Thor visited when he had a vision during Avengers: Age of Ultron.

If this does mean they’re going to Hel, then they might encounter other dead people from the MCU like Heimdall, Loki, or even the Ancient One. Could Gamora also be there and in her former costume? We’ve already seen her appear to Thanos as a child again within the Soul Stone, so who knows what’s possible in the future.

For one reason or another, Zoe Saldana filmed something while in her former Gamora costume, but we’ve still got a long wait before we know what it was for.

More like this
Culture
Jan. 28, 2023
Sci-fi legend René Laloux’s final movie is his most opaque — and maybe his best
By Jake Kleinman
Entertainment
13 hours ago
The Last of Us Episode 4 trailer teases the entrance of Melanie Lynskey’s character
By Claire Fox
Entertainment
11 hours ago
The Last of Us Season 2 Needs to Fix the Second Game’s Biggest Flaw
By Alex Welch
LEARN SOMETHING NEW EVERY DAY.
Share: