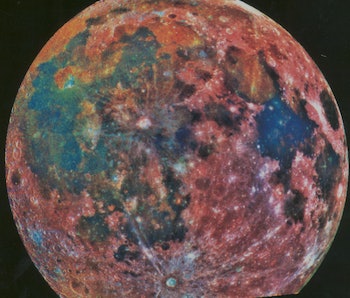 Since the 1960s, scientists have theorized that there might be frozen water in the moon’s cold, dark craters. Subsequent lunar missions only detected hints of water, which supported the theory but could also have been explained by other phenomena. On Monday, however, NASA confirmed for the first time that water does exist on the moon, citing definitive evidence of ancient deposits of ice intermittently spread within the most unforgiving parts of its polar regions.

The scientists working on the water-seeking mission formally announced their discovery in the journal Proceedings of the National Academy of Sciences. The revelation is based on data collected by NASA’s Moon Mineralogy Mapper (M3) instrument, which was attached to India’s Chandryaan-1 spacecraft, a lunar probe that launched in 2008. M3, designed to scan for evidence of solid ice on the moon, identified three spectral signatures that NASA say “definitively prove” there is water ice.

Think of these ice deposits as the last place you’d want to go swimming. Because of the tilt of the moon’s rotational axis, the patches of ice at its southern and northern poles are never directly hit by sunlight. In other words, it’s brutally cold: The scientists estimate that in the craters where the ice is rooted, temperatures never reach above -250 °F.

The discovery not only confirms a long-standing theory but also offers a glimmer of hope to those banking on future moon colonies. In an announcement on Monday, NASA’s Jet Propulsion Laboratory stated that “With enough ice sitting at the surface — within the top few millimeters — water would possibly be accessible as a resource for future expeditions to explore and even stay on the moon, and potentially easier to access than the water detected beneath the moon’s surface.”

If the moon has enough water, says NASA, future space colonists can either drink it or convert it into hydrogen and oxygen for rocket fuel or to breathable oxygen. While Mars (where there’s also evidence of liquid water) has been the main focus of space colony hype, some astrobiologists argue that future colonies in deep space will all have to build off initial successes on the moon.

These moon colonies, according to Amazon CEO Jeff Bezos, could be established within five years. In July, Bezos announced that his Blue Moon Project aims to establish a colony on the moon as early as 2023. No matter how much money Bezos pours into the colony, if it’s going to thrive, it will need to have water.