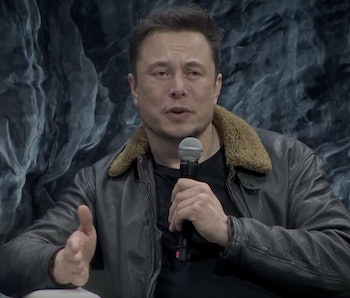 The three people who will decide if Tesla becomes a privately held company won’t include CEO Elon Musk, a Tesla spokesperson confirmed to Inverse Tuesday.

Tesla announced Tuesday that a special committee comprised of three members of its board of directors would review Elon Musk’s proposal to take Tesla private. The three people are Brad Buss, who’s been a member since 2009, and previously served in leadership roles at a number of other firms including SolarCity, where he was chief financial officer until February 2016, retiring four months prior to Tesla’s takeover announcement. Robyn Denholm has been a director since August 2014, previously working for seven years at Toyota and serving in multiple executive roles at Sun Microsystems for 11 years. Linda Johnson Rice joined the board in July 2017 after serving on the boards of companies including MoneyGram, Quaker Oats, and Dial Corporation. Rice’s promotion was praised for improving diversity in the company’s senior levels.

The announcement comes a week after Musk first announced his plan to take Tesla private on Twitter at a price of $420 per share (which only coincidentally bore similarities to a weed reference), action that already led to two lawsuits. Musk provided more details on Monday about how the announcement came after meeting with Saudi Arabia’s public investment fund. The expected cost of the buyout is unclear, as investors will have the choice to keep their shares or sell at a rate 20 percent above the $350 share price of the announcement day. Valuing every share at $420 would place the total market cap over $70 billion. Musk expects two-thirds of shares to stay in Tesla.

What’s between the lines in the statement is how much influence Musk has over the Tesla board and the three people on the committee. Also, how closely they share Musk’s view that Tesla would benefit by reverting to private company isn’t clear. From the outside, Tesla seemed merge with SolarCity without unreasonable controversy, and that was up to a shareholder vote. Tesla going private would be up to the board of directors, of which Musk is a member. Tuesday’s announcement makes clear he’s recusing himself from that choice, officially at least.

Before the team receives a formal proposal from Musk, the next step will be for the team to provide another update on the process that will be involved with Musk’s proposal. “The special committee has not yet received a formal proposal from Mr. Musk regarding any Going Private Transaction nor has it reached any conclusion as to the advisability or feasibility of such a transaction,” the press release states.

If successful, Musk will have finally seen off Wall Street short sellers that are betting against a rise in the stock price. Tesla is the most shorted United States stock on the market.