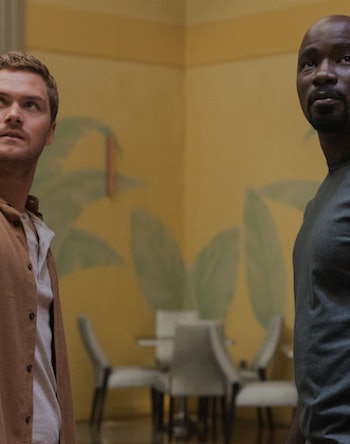 Iron Fist has always been racist. Far from being progressive, it’s part of a long line of media that reduces Asians and their culture to props for a white man’s adventure. Recasting the role with an Asian American was a huge missed opportunity and one that Marvel continues to fumble with its Iron Fist series on Netflix.

But beyond the issue of representation, Iron Fist’s depiction as a white kung fu master also means the series has never been able to truly address another crucial part of the same conversation: the long, shared history of Asian Americans and African Americans.

Inverse spoke to several experts and took a close look at how Hollywood has mostly ignored this racial dynamic and how Marvel forfeited a prime opportunity to tell a new story about what race means in America.

The most visible aspect of Asian-Black cultural exchange has been pop culture. The Wu Tang Clan is the obvious example, but more contemporary hip-hop artists have been greatly influenced by anime such as Dragon Ball Z. K-pop owes its legacy to Korean American artists and producers who exported the American hip-hop and R&B they grew up to the old country, and a significant amount of overseas K-pop fans are black.

However, Asian-African interaction in the Americas actually stretches back for hundreds of years. They’ve lived alongside each other in the same neighborhoods for generations, and not by accident. The historical segregation of both groups drove them to migrate to the same urban areas as a matter of survival. In fact, interracial marriages between Chinese American men and African American women were quite common in the 1800s due to anti-miscegenation laws and the low number of Chinese women in the country. The tenth US census of Louisiana recorded that 57 percent of interracial marriages with Chinese men were with black women. Chef and native New Orleans resident Leah Chase claims that yaka mein, a regional favorite in New Orleans, can be traced back to the cultural influence of these unions.

Despite this fascinating history, it appears that no Hollywood films have bothered to explore it.

Perhaps that’s because the cross-cultural exchange between Asians and blacks has been far from perfect, and the few films we have of Asian Americans and African Americans co-existing focus on ethnic strife.

In the 1970s one actor helped bring the two communities together again.

But in the 1970s one actor helped bring the two communities together again: Bruce Lee.

Lee was more than just an entertaining actor. He was an icon and an inspiration revered by both the African American and Asian American community. For black fans, watching another man of color fighting against systematic power, whether it was the Japanese Empire or sneering white villains, was deeply empowering.

“He was not white,” Crystal S. Anderson, a scholar specializing in Asian American and African American media, tells Inverse. “He was also standing up for people who were weaker. Those movies really delineate those kinds of power dynamics.”

That was especially important in the 1970s, which Anderson describes as a crucial point in African American history. There were few heroes of color during this period, so seeing a strong Asian American openly challenging the status quo was inspirational and deeply formative for many African American moviegoers.

“Those representations matter when you look at what was happening in the black community in the 1970s,” Anderson says. “You had a lack of economic opportunities, you had housing issues, you had the beginning of the crackdown by police on black communities. So for black people to see someone who wasn’t white on the screen was really powerful, and I would argue that it was also powerful because it made that sort of cross cultural affinity a norm.”

Anderson vividly remembers the pride she felt seeing a photograph of Bruce Lee hanging out with African American martial artist Jim Kelly, “just standing up there and look cool.” Kelly became the first black martial arts film star when he appeared alongside Lee in Enter the Dragon.

It was an image that stuck. Black activists in the Civil Rights movement studied martial arts for self-defense but also for spiritual fortitude.

“When an African American is drawing on kung fu to be more empowered, it means something different than a white guy picking up kung fu in a privileged way,” said Yuen, who’s currently studying Shaolin kung fu to reclaim her own heritage. “Asian Americans picking up hip-hop are looking to fit into America. It’s about discrimination and how they can draw power.”

There’s a scene in Luke Cage where a group of black enforcers working for Mariah Dillard hit up a pair of Chinese restaurant owners for protection money.

“You’ve been in this country for how long?” asks one of the men, while another smashes a vase with a baseball bat. “And you still can’t speak English.”

Cage, a frequent customer and a tenant of the building, defends the couple. It’s one of the rare instances of seeing black and Asian characters interact screen, but the characters never unpack the relationships of African Americans and Asian Americans at large.

It’s one of many moments in the Netflix/Marvel universe that falls short in its examination of race relations. It’s also a clear reminder that the drive for an Asian American Iron Fist wasn’t just about representation or reclamation, but also to explore fresh stories from a non-white perspective.

One of the hallmarks of Iron Fist’s character is how he confronts his white privilege through his friendship with Luke Cage. This is a valuable lesson, but one that has been taught many times before, and it reinforces a frustrating tendency in American media to focus any discussion of race on white people.

There are already a plethora of films and television shows that explore how black people or Asian people relate to white people. Almost no work has focused on how Asian Americans and African Americans relate to one another, despite it being a shared experience for millions of black and Asian kids living in American cities from New York, Philadelphia, Los Angeles, Baltimore, and more.

Recently, a brawl at a nail salon in Brooklyn unearthed long-simmering tensions between the black residents and Asian business owners. Some of the black protesters reportedly chanted “where is ICE?”, according to the New York Post.

It made me wonder: How would an Asian American Iron Fist and Luke Cage have seen each other?

Anderson believes that an Asian American Iron Fist could have also introduced a story about healing.

What happens a lot if we talk about anti-blackness among Asians but we don’t talk about anti-Asianness among black people,” she said. “Like they don’t have it? They can’t harbor those kind of things? It’s based on the same lack of knowledge and misinformation that other groups have. If you don’t have that Asian American character there, we can’t talk about it.”

Out of all the legacies that Marvel could’ve chosen to honor Bruce Lee’s career, it chose erasure.

Roy Thomas, the writer who created the Iron Fist comic in 1974, dismissed all criticisms of whitewashing in an earlier interview with Inverse. This is profoundly ironic because Bruce Lee, the actor who started the 1970s American martial arts craze which Iron Fist was born out of, dealt with racist casting and whitewashing throughout his entire career.

Lee spoke multiple times about how Hollywood studios didn’t see him as a suitable action star because of his race. According to his own account, Lee also pitched the idea for the television show Kung Fu, which ultimately hired white actor David Carradine to play the role of the biracial monk Kwai Chang Caine.

Iron Fist had to chance to be truly groundbreaking, a story about race that went beyond the binary view of race in America that focuses on how white people relate to everyone else. What we got instead was yet another story about a rich white man learning about his privilege not through his own effort, but through the unwarranted labor and responsibility of a black man.

Out of all the legacies that Marvel could’ve chosen to honor Bruce Lee’s career, it chose erasure. Iron Fist cast a white man in a story that should have always belonged to an Asian man, and like Kung Fu, all we can do is wonder at what could have been.