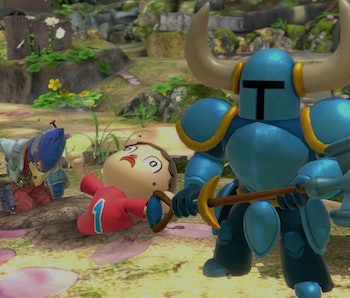 Shovel Knight is coming to Super Smash Bros. Ultimate… sort of. The protagonist of the popular indie Kickstarter game Shovel Knight is, at last, joining the latest installment of Nintendo’s crossover fighting game series, but as (wait for it) an Assist Trophy.

On Wednesday, Nintendo’s Direct presentation for Super Smash Bros. Ultimate announced Simon Belmont and King K. Rool as playable characters (plus Echo Fighters in the form of Richter Belmont, Dark Samus, Chrom). It also announced a slew of new “Assist Trophies,” which in plain terms means guest characters who show up at random to help players who activate them on the battlefield.

Some of the new Assist Trophies include Zero from Mega Man X (voiced by Johnny Young Bosch, I think!), Knuckles from Sonic the Hedgehog, Krystal from Star Fox Adventures, the creepy-ass Moon from The Legend of Zelda: Majora’s Mask, and Rathalos from Monster Hunter, who is big as hell.

And of course, the new slew of Assist Trophies includes Shovel Knight, a non-Nintendo character who frequents many fan-made “Most Wanted Character” lists. Shortly after appearing in the Nintendo Direct stream, the official Nintendo Versus Twitter account shared photos of Shovel Knight in the new game.

Aside from just plain beating up other players with his signature shovel, Shovel Knight also “digs” up healing items like food for players to use.

Shovel Knight isn’t a classic Nintendo character, but his retro-style video games made him a fan favorite for the series. Introduced in 2014, Shovel Knight is a 2D platformer heavily inspired by classic NES games. Developed by Yacht Club Games, Shovel Knight was launched following a successful Kickstarter campaign.

The game was originally released on multiple platforms, including Windows, Nintendo 3DS and Wii U, and later ported to PlayStation 4, Xbox One, and PS Vita. It was later ported again as a launch title on the Nintendo Switch.

Super Smash Bros. Ultimate will be released on Nintendo Switch on December 7.