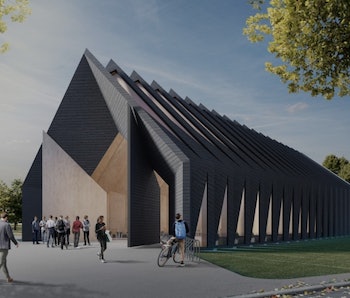 When we think of urban cities of today, we think of massive clusters of buildings constructed with steel and concrete, or rings of cascading suburbs. Picture the city of the future and you’re probably thinking of something at least a little sci-fi. But the reality is the future of cities may actually have a much more naturalistic feel.

That’s according to a group of architecture students at MIT who have developed a new design for building massive structures out of timber called the Longhouse. The group will be presenting their vision for a community centered co-working space at the Maine Mass Timber Conference in October, a conference dedicated to finding more sustainable uses for wood which, at least for now, is something the continent possesses in abundance.

“In North America, we have an abundance of forest resources, and a lot of it is overgrown,” John Klein, the MIT researcher who taught the class, told MIT News. “There’s an effort to find ways to use forest products sustainably, and the forests are actively undergoing thinning processes to prevent forest fires and beetle infestations.”

One of the goals of the project is to shift the perception that wood is only good for relatively small or medium sized structures. But the mass timber technique — which relies on laminating together timber to make a kind of supersized plywood — has already been used to build an 82,000-square-foot design building the University of Massachusetts at Amherst.

Why Build Buildings Out of Wood?

Though it’s a little counterintuitive, wood structures present a number of advantages. Wood is actually more resistant to fires than steel is, thanks to the char that protects the core of the wood for up to two hours. Wimpy steel, by contrast, melts when you heat it putting the building’s structural integrity at risk of failing. The bigger the wood, the more fire resistant it is.

But perhaps more importantly, mass timber homes use a material — wood — that removes carbon from the atmosphere as the trees that produce it grow. Manufacturing concrete requires baking limestone, by contrast, a process that winds up releasing greenhouse gasses into the air. Mass timber homes are also prefabricated, which cuts down on the air pollution from trucks traveling to and from construction sites.

So why aren’t there more of these beautiful, sustainable buildings? The MIT team cites coding limitations, which often restrict how high wood structures can be. Some municipalities have already started accommodating notable mass timber structures, for example British Columbia in Canada already has an 18-story mass timber building called the Brock Commons.

More like this
Science
Jan. 26, 2023
Lab-grown chicken could hit store shelves soon — here's how it tastes
By John Wenz
Science
Jan. 29, 2023
Clean energy farms may endanger birds and bats — but the remains can reveal a solution
By Emma Foehringer Merchant and Undark
Innovation
Jan. 25, 2023
Watch: This jail-breaking wireless robot melts and reassembles on command
By Jennifer Walter
LEARN SOMETHING NEW EVERY DAY.
Related Tags
Share: