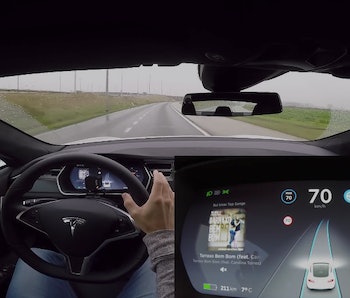 Tesla’s full self-driving project is taking shape, and it’s developed a super-powerful chip to bring it to life. On Wednesday, CEO Elon Musk unexpectedly revealed the company has been developing a chip for the past three years that’s 10 times faster than the existing Nvidia chip, which will slot into place and unlock full autonomy.

“We’ve been like semi-stealth mode basically for the last two to three years on this, but I think it’s probably time to let the cat out of the bag because the cat’s going to come out of the bag anyway,” Musk told investors during the company’s second-quarter earnings call. “But it’s an incredible job by Pete [Bannon] and his team to create this, the world’s most advanced computer designed specifically for autonomous operation.”

The new chip, which Musk described as “the key to Tesla full vehicle autonomy,” blows the existing Nvidia Drive PX 2 out of the water. The Nvidia chip, developed after the firm realized video game graphics are trying to solve similar computational problems to autonomous cars, offers around eight teraflops of performance, around six times more than the Xbox One. But where the PX 2 can process 20 frames per second, Tesla’s chip brings this up to a staggering 2,000 frames with full redundancy and fail-over. Tesla’s setup is designed from the ground up for artificial intelligence, running the neural network at “bare metal” level.

“Our current hardware, which – I’m a big fan of Nvidia, they do great stuff,” Musk said. “But using a GPU, fundamentally it’s an emulation mode, and then you also get choked on the bus. So, the transfer between the GPU and the CPU ends up being one that constrains the system.”

Pete Bannon is leading the development of what the company refers to as “Hardware 3.” Bannon led the design of the processor in the iPhone 5 and 5S, the latter of which was the world’s first 64-bit smartphone processor, before joining Tesla three years ago. Bannon took up his role of project head in April after the departure of Jim Keller, and on Wednesday he struck a positive tone as he outlined the team’s progress.

“The chips are up and working, and we have drop-in replacements for S, X and 3, all have been driven in the field,” Bannon said. “They support the current networks running today in the car at full frame rates with a lot of idle cycles to spare.”

“Hardware 3” indicates that the company considers it the third-generation of autonomous car hardware. Tesla first started shipping semi-autonomous driving features like highway cruising under the name “Autopilot,” powered by a chip developed by Mobileye. In October 2016, Tesla unveiled “Hardware 2,” which offered similar functionality as the old system but with technology developed in-house by Tesla and powered by Nvidia. These newer vehicles are built with eight cameras (three facing forwards, the other five are pointing around the car), alongside the radar, GPS, and ultrasonic sensors. Tesla offers these newer cars with the $5,000 enhanced Autopilot upgrade as with the previous models ($6,000 after purchase), but users can also pre-order full autonomy for a further $3,000, a figure Musk has claimed could rise to $5,000 when the feature launches. In November 2016, the company released a video showing full autonomy in action:

Tesla has always claimed that “Hardware 2” cars contain the necessary sensors to support full autonomy, enabling a car to drive from point A to B without human intervention, but it’s been less clear on whether the supplied computer will support the feature. In February 2017, Musk said at Dubai’s World Government Summit that “if it turns out that the computer power, that more computer power is needed, we can easily upgrade the computer.” Nvidia, for what it’s worth, does not claim the PX 2 supports full autonomy.

As for when the feature will ship? Tesla initially promised coast-to-coast driving by the end of 2017, but on Wednesday Musk explained that the team is working on the ninth version of the Autopilot software, focusing on big safety features. That’s set to ship in September, after which Musk claims the team will turn its attention to achieving full autonomy.