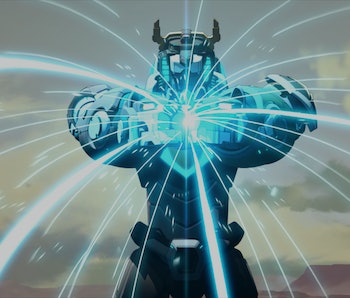 At long last, it’s time for Voltron to come to Earth. At San Diego Comic-Con this past weekend, the acclaimed Netflix series Voltron: Legendary Defender made a splash as the cast and crew previewed the seventh season premiere in front of thousands of adoring fans.

But among all the exciting news, including the revelation that one of the Voltron Paladins is gay, the biggest story is that Team Voltron is finally returning to Earth in the penultimate season of the series.

Here’s everything we learned about Season 7 of Voltron: Legendary Defender, which premieres August 10 on Netflix.

Indeed, the big news that took the breath of many Voltron fans away is the fact that the square-jawed leader of the Voltrons, Black Lion pilot Shiro (voiced by Josh Keaton), is gay. Back on Earth, Shiro’s ex-fiancé, Adam, will be there, but things aren’t looking too bright for the couple.

Shiro is now one of the few openly gay characters in a children’s cartoon. He’s also a person of color and suffers from PTSD, which means Shiro single-handedly checks off many important boxes of representation.

“For me, it was exciting,” co-showrunner Lauren Montgomery told the press (via Hypable). “The idea of having this character who had been so much to so many people. And none of that was based on his sexual orientation … and to reveal that he is a gay man and that in no way changes his relationships with any of these people, anything that he’s done.”

The Garrison Will Return

As the characters return to Earth, the Galaxy Garrison — the military defense arm of the borderless, united Earth of the future — will play a prominent role in the season.

“When they get to Earth, there’s a ton of business to be had,” Dos Santos explained at Comic-Con. “Things gets pretty serious in the back nine.”

As confirmed by Den of Geek’s Shamus Kelley, Voltron Season 7 will have another concept episode, this time in the form of a classic TV game show. “The Feud,” a thinly veiled parallel to Family Feud, will help add comedy and levity to the it-hits-the-fan darkness of the seventh season.

This wasn’t an official announcement, but doing some quick math reveals that Season 7 will be the second-to-last of the series.

On Friday, the official Twitter for Voltron tweeted that Season 7 will be made up of 13 episodes, a change from previous seasons that were released in seven or eight-episode chunks. It had been previously confirmed that the series will last 78 episodes, so Season 8’s batch of 13 episodes will be the last. Let’s hope the Paladins can make it out the other side in one, multi-colored piece.