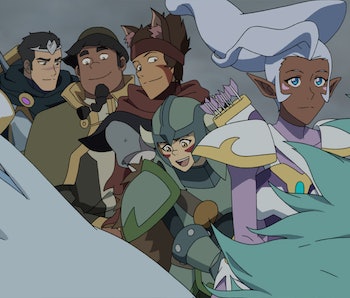 In the newest season of Voltron Legendary Defender, the Netflix reboot of the ‘80s anime in which five pilots take control of giant, mis-matched robot lions, the Paladins of Voltron take a breather from their war against the Galra Empire to play… Dungeons & Dragons?

That’s right. In Season 6, “Monsters & Mana” eases up on galactic war so our heroes can unwind with a thinly-veiled analog of games like Dungeons & Dragons and Pathfinder. (And because it’s the future, miniatures and pencils are swapped for holograms and tablets.) As an homage to tabletop culture, the episode soars like so many great D&D-themed episodes of shows like Freaks & Geeks, Community, and Buffy the Vampire Slayer.

But in an interview with Inverse, showrunners Joaquim Dos Santos and Lauren Montgomery say there’s more to the episode than filler, as “Monsters & Mana” offers a rare, new glimpse into the soul of the show’s familiar characters.

“We’ve luckily had a number of episodes for people to know these characters,” Montgomery tells Inverse after the release of Voltron Season 6 on Netflix. “Since we’re so familiar with these personalities, it’s fun to see how that translates to this imaginary world, but still see their personalities come through.”

While each of the Paladins fulfill specific archetypes in the series — Shiro is the dashing, square-jawed leader; Lance is the smooth-talking jokester; and Hunk is a brute who can engineer the heck out of gizmos — the chosen avatars reveal how the Paladins of Voltron see themselves.

“Hunk, as a Paladin [of Voltron], he’s a tank, but you know he’s this gentle soul,” explains Montgomery. “In ‘Monsters & Mana,’ he’s a healer and a mage, and not a close-quarters fighter. It’s fun to play with that, to see what their true personalities manifest as in this other world.”

Shiro, meanwhile, is still Shiro, to the chagrin of his friends. In Voltron, Shiro is the brave leader of the Voltron Paladins. But in “Monsters & Mana,” Shiro is, well, the brave, selfless Paladin. Or, as it goes down in the show:

Shiro: “I don’t know what’s more fulfilling than being a Paladin.”

Coran, the game master: “BUT YOU’RE ALREADY A PALADIN IN REAL LIFE!”

“It was us making a joke that Shiro was ‘Mr. Hero Guy,’” Montgomery says. “We had to bend over backwards to make him interesting by giving him his tortured past. He was probably the closest to your cookie-cutter hero, and we generally find that boring. So we were making a joke at Shiro’s expense that this is what he does and all he wants to do.”

In fact, it’s one advantage Voltron had over a show like Community, where the avatars don’t quite echo the Greendale group.

Montgomery, who reveals an obsession for Communiy’s D&D episode, says she used that to their advantage. “I knew we weren’t going to do it in the same way, but it definitely fueled me to do that episode,” she tells Inverse. “I love that episode of Community and I would watch it over and over again.”

“From a story perspective, it made sense,” says Dos Santos (who, conversely, hasn’t watched Community). “It was a down time, in terms of Voltron’s conflict with the Galra.”

But from a meta point of view, “Monsters & Mana” allowed the writers to have fun before capping off Season 6 on the game-changing note that will forever changes the direction of the series. “We got all these bucket list episodes we wanna do,” he says. “We’re all fans of RPGs, tabletops, J-RPGs on Super Nintendo, World of Warcraft, all of the above. It grew out of that.”