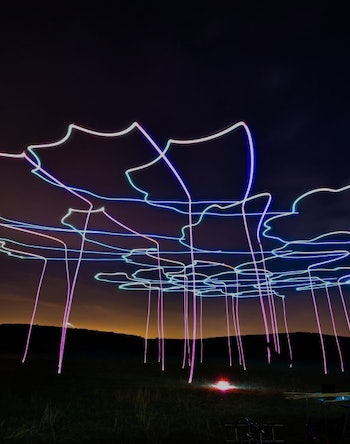 Whether you find flocks of birds terrifying or mystifying, you can objectively say that they’re pretty skilled at not ramming into each other mid-flight.

Looking to the success of birds, group of European researchers has successfully enabled a group of 30 quadcopters to fly in sync after programming the drones to mimic the flight of a flock of birds.

Dr. Gábor Vásárhelyi, the first author of this new research published on Wednesday in the Science Robotics journal, tells Inverse he believes collective bird movement holds the answer to solving an issue we’ll soon be faced with: Keeping thousands of drones from colliding over our heads. Dr. Agoston E. Eiben, a co-author of the new study, describes their development of drone technology that mimics how birds flock together as “natural computing.”

Here’s how they did it: Researchers spent six years observing pigeons with GPS devices to determine if they could reproduce these aerial formations of the birds with autonomous drones. For drones, mastering synchronized flight may be a crucial first step to mastering real-world delivery routes.

“When the first cars appeared on the streets people were walking in front of them and ringing a bell that cars were coming, but soon there we a diversity of cars moving in coordinated ways throughout cities, something similar is going on with drones,” Vásárhelyi says. “Now, every drone has a single pilot, soon these drones will have such a density in the air that we need to make them able to communicate with each other.”

Why Drone Delivery Could Be Big Business

This in-air communication is crucial, because of the intense interest in drone delivery as a business. Multi-national companies and startups alike are working to make these services a reality.

The best-known player in the competition to develop delivery drones is probably Amazon: The e-commerce giant makes 1.6 million daily deliveries in the United States, according to one estimate. Even if its future Prime Air service would take care of a quarter of those deliveries, that would be thousands of autonomous drones that would some system to make sure they don’t slam into each other, or anything else.

In March 2016, the Federal Aviation Administration announced that drone registration outnumbered that of airplanes. Standard planes use control centers to coordinate their flights but with so many drones in the sky, it would be impossible to develop a drone-ports to manage them all. Eiben tells Inverse that each drone will need to have the capability of managing itself.

There needs to be underlying, decentralized software to make sure [drones] don’t collide.”

“We have a massive e-commerce industry. If drone delivery gets big than urban environments will be a major hurdle for various drones sharing the same airspace,” says Eiben, a professor of computer science at VU University Amsterdam. “There needs to be underlying, decentralized software to make sure they don’t collide, it’s core to this advancement.”

Eiben explained drone delivery has been held back by the “reality gap” — or the rift between what works in simulation and what works in real life. Previous studies found that even though solutions seemed promising on the computer screen, testing them on hardware would yield disappointing results. But not this time.

Vásárhelyi and his other colleagues built their own custom drones, implemented their bird-inspired models, which were refined by Eiben’s software expertise and dunked on prior research. They managed to get 30 quadcopters to self-organize themselves using GPS modules, just like our feathery, avian friends. They managed to pull this off by not only determining the distance to the closest drone but also calculate the speed and acceleration of their fellow robots.

But don’t worry, this isn’t the beginning of some futuristic version of Alfred Hitchcock’s The Birds. Vásárhelyi sees great potential for this type of technology to be used for search and rescue missions, as well as enabling drone deliveries.

So if the day comes where quadcopters are delivering parcels right to your window sill, remember to thank the birds. The OG drones.