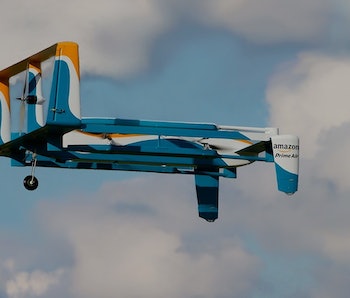 Amazon officially received the patent Tuesday for tech that would allow its planned drone delivery service to analyze customers’ homes and offer recommendations on things they might want to buy.

The company files for patents for plenty of designs that may or may not ever see the light of day — consider its idea for an underwater warehouse — but this particular idea fits more naturally with Amazon’s plans to make products that help organize users’ lives. And, at first blush, the idea of a drone scanning your home to see what items need replacing sounds like a further erosion of traditional ideas of privacy, especially if the drone is able to do more than just recommend a rake for leaves or a new welcome mat and actually see inside your home to make its suggestions.

But it’s important to keep in mind a key detail from the patent filing: This would strictly be a voluntary, opt-in service. Here’s the relevant section from the filing, which stresses that only people who want a drone scanning their house for recommended buys would get that particular experience.

More like this
Innovation
2 hours ago
Can cars run on water? The science of a TikTok conspiracy theory, explained
By Andrew Moseman
Innovation
6.27.2022 8:00 PM
Artificial photosynthesis can grow plants without light — and may solve a planetary dilemma
By Steph Lee
Innovation
6.25.2022 10:00 AM
9 veggies that are healthier cooked than raw
By Laura Brown and The Conversation
Share: