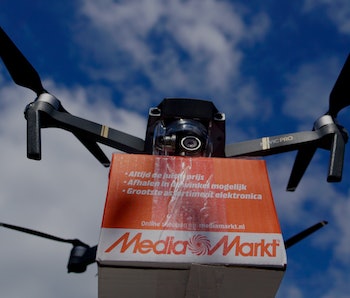 Drone deliveries are zooming in to land. The nascent technology has seen limited use in countries like the United Kingdom, but a breakthrough in cooperation efforts between startups and the government has led to renewed confidence that package deliveries like Amazon could start flying through the air very soon.

“A lot closer than many of the skeptics think,” Earl Lawrence, head of the Federal Aviation Administration’s drone integration department, said at a Baltimore conference last week attended by the Washington Post. “I would like to move as quickly as I can.”

It was a message echoed by others, after a push from the White House to encourage action on the issue. Jay Merkle, an air traffic control official for the authority, said some drone proponents see operations possibly starting “this summer.” The agency has approved at least 10 pilot programs that are set to begin by May.

One of the most prominent use cases for drone deliveries would be Amazon. Its proposed Prime Air service would deliver packages weighing less than five pounds within 30 minutes, operating in a 20-mile radius from distribution centers. The company has previously spoken about a “transit zone” between 200 and 500 feet from the ground.

Amazon’s service is described as one of the furthest in development. The company made its first delivery on December 7, 2016 in Cambridge, England, where greater regulatory freedom has enabled Amazon to test at a faster pace. At the conference, vice president of the initiative Gur Kimchi suggested that American regulatory approval could be secured as soon as next year.

Some details are still up in the air (no pun intended), like how customers will actually tell the drone where to land. Amazon CEO Jeff Bezos has discussed the need for customers to print out a piece of paper with a symbol on it, which the drone will use as a safe landing spot. British-based DelivAir uses a smartphone as a GPS beacon to find its way to users, dropping down its parcel into users’ hands:

The finer details of drone delivery are already being fleshed out.