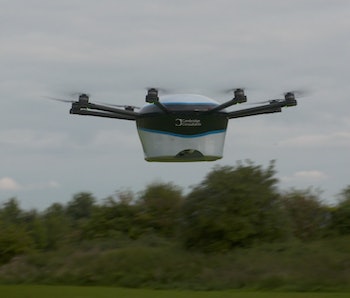 Ready to receive deliveries directly into your hands? While Amazon Prime’s one-day delivery may seem like an attractive prospect, Cambridge Consultants thinks a better solution is flying machines zip-wiring packages in a matter of minutes, Mission Impossible-style. The DelivAir, a concept machine unveiled Wednesday, promises to do just that.

“Drone delivery is fast and ideal for something that is needed immediately,” Nathan Wrench, head of the industrial and energy business at Cambridge Consultants, said in a statement. “In that case, a consumer wants a delivery directly to them as a person – not to a location.”

Drone deliveries are nothing new, but they typically depend on other infrastructure to complete the delivery. Matternet, a Swiss company that’s created a network of medical drones, drops packages off into separate stations, while Starship’s network of ground-based delivery drones depends on roads and addresses to find the recipient. DelivAir cuts all of that out of the equation.

Say for example you’re cycling along a road and you get a puncture. In days gone by, you’d have to either go to a bike repair store, or order something to come to your home address. With DelivAir, you instead get your phone out, pick one that you like from a retailer, and send a GPS signal by pressing “order.” The system uses a patent pending two-stage routing process to hone in on your location. When it gets near, the drone switches to optical 3D tracking to move in closer.

At this point you get your phone out again, flip it up and point it to the sky. The phone blinks a code using the rear camera’s LED, which the drone uses to verify that it’s delivering to the correct person. Your order then slowly drops down from the sky.

“Ultra-precision is the future of drone delivery, and the opportunities are almost limitless,” Wrench said. “The mobile phone changed the way we make calls, from a location to an individual; we believe this technology has the potential to reshape e-commerce in the same way, making deliveries to a person a practical proposition, no matter where they are.”

As for when these drones may take to the skies for general public use, that’s still up in the air. A Cambridge Consultants spokesperson tells Inverse:

DelivAir will remain a concept for the foreseeable future, particularly while legislation tends to limit the ability to fly drones in built up areas. Cambridge Consultants built DelivAir as a calling card, showing our multidisciplinary skillset and talented team. As product developers we don’t take our concepts to market, but we’re confident that our future clients will want to partner with us to develop future drone concepts, with DelivAir as a starting off point.

Watch an interview with Henry Fletcher, senior engineer behind the project, below: