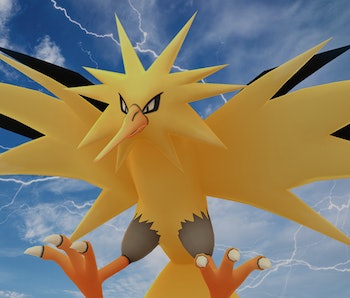 As Pokémon GO Fest 2018 comes to a close, players have on question on their minds: How do I get a Zapdos? Earlier in the year, Niantic hinted that a bonus event would be released if players around the world banded together to complete a list of global challenges.

Zapdos Day is that promised bonus event, which offers players a chance at capturing the legendary Pokémon. Here’s everything you need to know about the planned event.

Zapdos Day is a bonus event that must be unlocked through Global Challenges. Assuming that Pokémon GO players fulfilled the challenges respective to their regions, Niantic will release Zapdos Day and the legendary Pokémon will be available for capture as a raid boss.

All the challenges must have been completed at Pokémon GO Fest 2018 , and players in Chicago had to complete 100,000 challenges on-site to contribute towards Zapdos Day.

Zapdos Day is set to happen on July 21. There’s no word yet on exactly what time it will take place, but Niantic has confirmed that the event will last for three hours.

How To Start the Zapdos Raid and Win

Once all the challenges are out of the way, the only thing left is to spin a photo disc at a gym. Doing so will earn you five free raid passes which you can use towards a battle against Zapdos.

If you want to win, bring your Rock-type Pokémon. Tyranitar is a great choice if you snagged a Larvitar in the Larvitar Community Event, but you could also go with Golem. Rayquaza, Jynx, and Mewtwo are strong candidates as well.

And be sure to plan out your Saturday. Three hours is a hefty chunk of time and raid bosses have ten times the CP of regular Pokémon. You’re going to be fighting Zapdos for a while.

Getting a Shiny Zapdos

Like all Shiny Pokémon, the only way to get a Shiny Zapdos is persistence and luck. It’s a completely random encounter, so your only option is to grind out as many raid battles as you can. Just pray to RNGesus and hope for the best.

However, even if you don’t get a Shiny Zapdos in the end, don’t sweat it. Shiny and regular Zapdos are identical to each other in all the categories that matter, like stats and abilities.

Besides, there will be plenty more Shiny Pokémon to catch once Gen 4 rolls around.