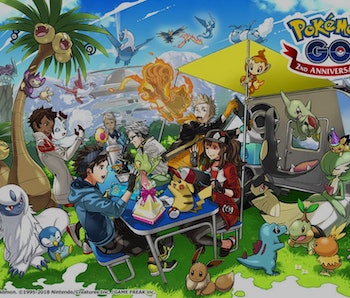 The Pokémon series has always been a completionist’s dream, and Pokémon GO is no different. There are tons of tasks to complete but, most importantly, many different kinds of Pokémon to collect. Now, a recent Twitter post from Niantic suggests that your Pokédex is about to get a whole lot bigger.

Pokémon GO is preparing for the second leg of its 2018 Summer Tour. The first was Safari Zone Dortmund, where users were disappointed to report technical issues during the event.

The next upcoming event is Pokémon GO Fest 2018 on July 14 to 15. A special event will be held in Lincoln Park, a park in Chicago’s North Side, but the perks and bonuses will be available worldwide. Four new Pokémon variants — Shiny Plusle and Minun and Alolan Diglett and Geodude — will also be making their debuts for the event.

However, Niantic tweeted a teaser on July 12 hinting that the game is ready to enter Gen 4, which will presumably add 107 new Pokémon.

That’s a whole lot of Pokémon. That little green guy zipping above the blonde Dugtrio on the left is Celebi, a Pokémon that is rumored to be available at Pokémon GO Fest 2018.

Some of the other Pokémon in the image like Turtwig, Chimchar, and Piplup aren’t in the game yet, which suggests this is indeed a sign that Gen 4 is coming.

Niantic sent out a similar image for its first year anniversary to tease future updates.

Invest in a good pair of sneakers because you’re going to have a whole lot of walking to do.