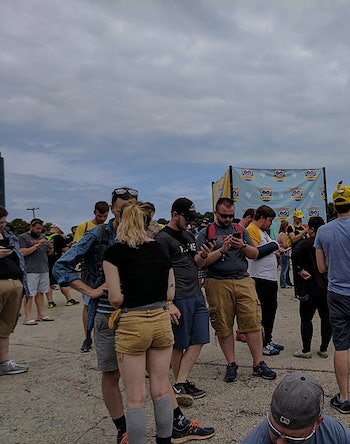 Pokémon GO Fest is set to return this weekend, with an ambitious two-day celebration in Chicago’s Lincoln Park, but this may come as a surprise to anyone who attended the inaugural event last year, which saw various problems stem from poor cell phone service that brought gameplay to a stand-still.

Despite the festival-stopping problem last summer, Pokémon GO fans are optimistic ahead of this year’s festival. In a series of interviews, several attendees from the last year’s event tell Inverse that they’re less interested in getting a slice of that settlement money and more focused on returning to Chicago for Pokémon GO Fest 2018.

Pokémon GO Fest is actually about the people who go, not the game itself, say attendees.

“I didn’t go specifically for the game,” says one Pokémon GO fan who asked to remain anonymous. (When we asked why they became increasingly agitated and claimed they didn’t want anyone on Reddit questioning them about this article.)

“I could play that anywhere,” they continued. “I went for the experience. To meet new people who love the game as much as I do. And I did exactly that.”

Last year’s festival was roundly criticized as a mess, and game-maker Niantic eventually settled a class-action lawsuit with its attendees for just over $1.5 million.

“I didn’t go specifically for the game. I could play that anywhere. I went for the experience. To meet new people who love the game as much as I do. And I did exactly that.”

Of course, not everyone who attended Pokémon GO Fest last year feel like Niantic owes them any money. For some fans, the company’s already done more than enough to atone for its mistakes.

Virginia Lyon, a Chicago native, explained why she isn’t planning on seeking reimbursement:

“People who went got their tickets refunded, $100 in Pokécoins, still got to hang out in huge crowds, socializing and meeting up, and had tons of access to both raiding opportunities and rare Pokémon over a much wider area and timeframe than originally planned,” says Virginia Lyon, a Chicago native who attended the 2017 event. “Certainly enough to compensate for signal issues.”

Brennen Miller, another user from the Midwest, says that he thinks it’s unreasonable for Niantic to bear the brunt of the backlash instead of cell companies, which failed to meet the extra demand of thousands of eager Pokémon GO players.

“Niantic gave the cell companies all warnings about how they should bring extra towers because they knew it would be taxing on the network,” he says.

Despite connection issues, the same anonymous Pokémon GO fan still considered the event to be an overall success, which might explain why they’re not eager to take more money from Niantic.

They went on to express sympathy for any fans who really feel they didn’t get their money’s worth, which also made them less inclined to accept any money from the settlement as well.

“Not everyone had the experience I did,” they say. “There are some fans that are like me who had a great time and I don’t think we should take away from those who truly deserve reimbursement.”

To be fair, announcements regarding the 2017 event’s extended timeframe and area came late in the day, after many guests had already left Grant Park in frustration. And fans who were planning on catching red-eyes out of the city once the fest wrapped up were similarly out of luck. For attendees forced to buy scalped tickets at a considerable markup (a trend that continues into 2018), an increased field of play and in-game currency may not have been enough to consider the event a success.

While it would be easy to write the 2017 Fest off as a failure, a number of players at the Pokémon GO Fest last year were similarly undaunted by technical difficulties and oppressive heat.

Despite the disappointment and outrage directed at CEO John Hanke’s reception on the main stage (video below), most fans were happy to be out meeting people and determined to make the most of the day overall.

Whether Niantic’s second attempt at a major live event will go any better remains to be seen, but even if it doesn’t, there’s a good chance the fans will still see the bright side.

“If I could afford to fly out there again this year, I would absolutely go.”