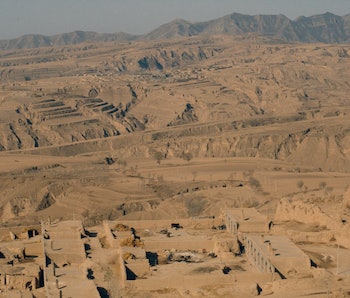 Earth is littered with evidence of intrepid, ancient peoples who had one big thing in common besides the genus Homo: they moved. Over millions of years, they spread throughout the world, leaving traces of their journey behind. Scientists are slowly closer to nailing down the details of this great migration, but every new discovery of ancient art, tools, and bones forces them to re-evaluate the story of our ancient kin. Now, a new discovery in China, described in a new Nature paper, upends our history books even further.

“But I was not surprised in the sense that I think hominins started to leave Africa shortly after they learned around 2.6 million years ago how to produce sharp flakes that could be used for tasks like stripping meat off a carcass,” he explains. “This skill opened up a whole new niche for them to expand into, and that’s what I think was the trigger that enabled them to expand across Africa.”

Before this discovery, the oldest evidence of hominins in Asia were skeletons and artifacts found in Georgia, which were between 1.77 and 1.85 million years old. This evidence supported a narrative in which Homo erectus was the first hominin to leave Africa, colonize Asia, and later move into Europe. It was assumed that this all happened around 1.8 million years ago, which is the same age as the earliest found African specimens of H. erectus.

These newly dated stone tools change that theory, suggesting that hominins had moved out of Africa before H. erectus had even emerged as a species.

“Instead, the first Asians are probably an early and very primitive form of our own genus Homo,” says Dennell. “Sadly, the African fossil hominin record at 2.1 to 1.8 million years old is currently very poor, so we don’t really know much about hominins at this time.”

While the team doesn’t know which hominins used the newly discovered tools, they note that the tools are similar to those used by other members of the Homo family in Africa at least 3 million years ago. The team analyzed 96 stone tools extracted from 17 layers of sediments and used a technique called “palaeomagnetism” to date the earth the tools were found in. The idea was that the tools are likely the same age as the layers of mud that had become encrusted around them.

A fossilized H. erectus skull, discovered in the same area in 1964 at a site called Gongwangling, showed the team where in the Loess Plateau to look. Zhaoyu Zhu, Ph.D., a Chinese Academy of Sciences geologist and co-author on the new study, dated the skull to 1.63 million years old and pursued further investigations in the area. One of the reasons the Loess Plateau is such a hotbed for discovery, explains John Hawks, Ph.D., a paleoanthropologist not involved in the study, is because of its unique geological makeup.

“This is a huge region of China covered by these ancient windblown sediments, called loess, and there have been many important archeological discoveries there,” Hawks tells Inverse. “I think that the systematic approach to identifying these dry time periods with large loess deposits is really important, because it is allowing scientists to tie together ancient landscapes and evaluate tools and fossils from many different sites.” Over the past several years, says Hawks, archeological finds in this area have shown that ancient human relatives have lived in this part of China in almost every time interval, from 2 million years up to recent times.

China, in general, is becoming an exciting place for human evolution research — and continued exploration of the Chinese Loess Plateau will likely change up our understanding of our past even further.

“This has been one of the high points in my career,” says Dennell. “It has been an absolute pleasure and privilege to work with my Chinese colleagues in such an amazing landscape as the Loess Plateau.”

More like this
Science
6.21.2022 10:45 AM
Ancient stalagmites point to a massive drought that upturned 6th century Arabia
By Allison Parshall
Science
6.30.2022 11:00 AM
NASA launches CAPSTONE and more: Understand the world through 8 images
By Robin Bea
Science
6.22.2022 8:26 PM
Yes, there are mites living on your face — and they can poop, a new study finds
By Allison Parshall
Related Tags
Share: