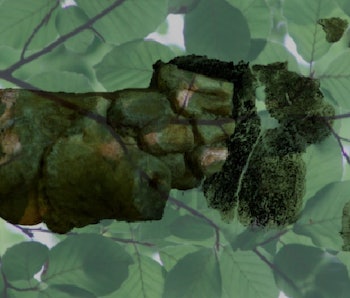 Things weren’t always so safe on land. Long before Homo sapiens stalked the Earth, ancient hominins like Australopithecus afarensis — Lucy’s kin — took shelter in trees when predators prowled the underbrush. But evolutionary anthropologists, trying to pinpoint when bipedalism became a prominent hominin trait, have long been divided about how much time these ancient hominins actually spent hiding in the trees. Now a tiny, thumb-sized A. afarensis foot, described in a new Science Advances paper, tells us a little more about their past.

The paper, lead-authored by Dartmouth University evolutionary anthropologist Jeremy DeSilva, Ph.D., describes a specimen from the “Dikika toddler,” named for the place in Ethiopia where it was found in 2002. DeSilva tells Inverse that the tiny foot, which belonged to a female only two-and-a-half years old, helped his team answer the long-standing question in the field: Did A. afarensis rely heavily on trees, or were the presence of a few ape-like anatomies in an otherwise very human-looking foot just evolutionary hangovers from a time when our ancestors were reliant on the trees?

The tiny little foot, DeSilva says, shows that while A. afarensis adults were decently well equipped for a life spent walking on land, they weren’t born that way.

“The toddler foot had a more mobile big toe than the adults, which suggested to us that the kids were spending more time in the trees than the adults, and were also probably grasping onto their mothers when they were moving bipedally across the landscape,” DeSilva said in an email. “I was also surprised that their heel bones do not grow the same way ours do.”

In human babies, the heels are “chunky” from the get-go; kids are ready to walk as soon as their legs can support them. But comparisons of the skeletons of adult and toddler A. afarensis shows that, as babies, this species had heels that were “small and ape-like, meaning they had an entirely different strategy of heel development,” DeSilva says.

In some ways, A. afarensis represents the evolutionary moment when bipedalism began to take over. We take our ability to walk on two feet for granted now, but had ancient hominins never developed that ability we might never have freed up our arms to use tools or developed bodies that could run for long periods of time.

DeSilva explains that ancient hominins roughly went through three main “locomotor” stages to get to where we are today. Between four and seven million years ago, our tree-dwelling ancestors flirted with upright walking but weren’t too comfortable with it. Fast forward to about four million to two million years ago, and Australopithecus species, including A. afarensis, were getting pretty good at walking upright but could still scurry up trees to avoid predators at night: “[As] the Dikika toddler suggests, the kids were still scurrying into the trees for play or to escape a predator,” says DeSilva.

Then, the genus Homo developed; as far as we can tell, Homo erectus, which lived about 2 million years ago, was the first to leave the trees altogether, armed with new defense mechanisms, a bigger brain, and, well, newly freed-up arms.

“To avoid being eaten at night, it is likely that H. erectus had controlled fire, or was using some weaponry to keep safe,” says DeSilva.

Now it’s becoming more clear that, over one million years before H. erectus, toddlers in A. afarensis families hung out in trees with their mobile big toes when they weren’t hanging onto mom for support. As they got older, they found their footing as their heels developed — but, just like so many young adults now, they knew they could fall back on old habits, scurrying back up into the trees if times got rough. Now, most Homo sapiens don’t have that option, so it’s imperative we stay in control of the threats on the ground as there’s nowhere else to go.