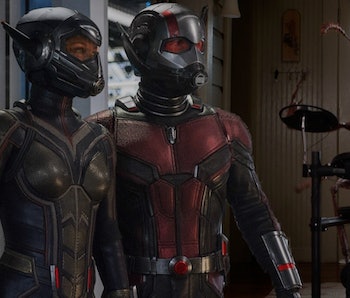 The events of an MCU movie’s post-credits scenes are usually amongst the first details to be spoiled once early bird fans have gotten the chance to see a new movie, and for good reason. Post-credits scenes typically set-up or tease the future of the 20-movie-strong MCU in major, major ways. But, it turns out that Marvel itself already spoiled the second of Ant-Man and the Wasp’s two post-credits scenes months before the film’s premiere.

This post contains spoilers for the ending of Ant-Man and the Wasp.

The first post-credits scene is a completely new and it was a major shocker. Scott is on a mission to the Quantum Realm, but while he’s stuck in there at an infinitesimally small size, Hope, Hank, and Janet suddenly turn to ash. The scene takes place at the same time as the end of Avengers: Infinity War, and the three characters are victims of Thanos’ infamous snap. The second post-credits scene, though, is not as revelatory. It’s the interior of Scott’s house, unnervingly empty. Clearly this is occurring after Thanos’ purge, so as the camera pans through the residence, audiences are expecting to see somebody else who survived.

Turns out, nope, the survivor is the giant ant Hank and Hope used as a stand-in for Scott, and he’s playing the drums. It’s funny and would be a pretty good twist, were it not for the fact that fans had seen this exact scene in the middle of the second Ant-Man and the Wasp trailer.

Marvel did this once before, as trailers for Black Panther spoiled one of its post-credits scenes by revealing that T’Challa speaks before the United Nations. Neither the Black Panther scene nor the Ant-Man scene were especially juicy — it would be a different story if Infinity War trailers had included a shot of Captain Marvel’s logo on Nick Fury’s pager — but it’s still a little vexing.

These less-important post-credits scenes work because they’re fun little surprises. Seeing the ant playing the drums could’ve been that, but instead dedicated audiences, unfairly or not, felt a little bit cheated.

But, hey — at least the Ant-Man and the Wasp trailers weren’t straight-up lying to us (lookin’ at you, Infinity War).

Ant-Man and the Wasp is now in theaters.