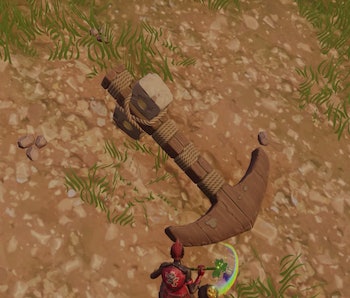 Strange things are happening leading up to the start of Fortnite Season 5. Portals began to show up on the island and signs started to disappear. Now, something weird appeared out of thin air leading to even more questions.

A week ago, Epic pulled off a one-time event where a rocket launched into the sky, teleported across the island, and then exploded into the sky causing a crack, which is still growing. From there, portals appeared on certain signs and not long after, the portal and the object disappeared. On Friday, players came across something that appears to be an anchor for a Viking ship. One YouTuber was able to capture the sudden appearance of the object.

So what’s happening? The current theory is that because of the rocket, the portals on the island are rips in time. The expectation is when Fortnite: Battle Royale Season 5 starts, the island will go back in time as evident by leaked images from data miners.

One data miner that goes by FNLeak on Twitter tweeted an image of various objects that were in the game at the time and have since disappeared or objects that will show up eventually like the anchor.

So far, most of the signs have vanished due to portals. As for the rest of the objects, the stagecoach and the cow bones have yet to show up.

It’s apparent that developer Epic Games wants to go big with the start of Fortnite Season 5. Players will likely see more in the coming days, especially on Tuesday when the next update to the game should arrive.

For those who think weird stuff is happening in Fortnite, they may be surprised to know that the game has invaded real life, as well. An image posted on Twitter showed the missing Durr Burger sign located in the California desert.