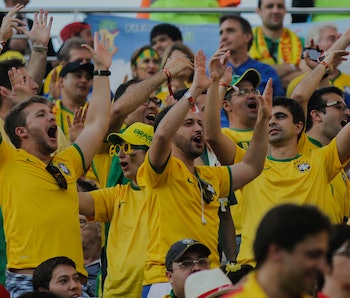 As we near the final stages of the World Cup tournament, the stakes are only getting higher. For starters, England won their first knockout game in 12 years to advance to the quarter-final. Perennial powerhouses Germany and Spain are out, and the title seems wide open. Now as the action reaches a climax, some viewers have started to notice that watching the tournament is taking a toll on their bodies — and scientists are a bit concerned.

To keep up with every game, fans — especially those in Asian time zones — have to pull intermittent all nighters. Things won’t be getting better anytime soon: In China, the remainder of the World Cup games will begin between 10 pm and 2 am. According to Jamie Zeitzer, Ph.D., a circadian physiologist at Stanford’s Center for Sleep Sciences and Medicine, staying up to watch these games can mess with your circadian rhythm and lead to some short-term health issues.

“If they stayed up consistently every night, that would be okay,” Zeitzer tells Inverse. “But typically what people do it stay up for a couple nights and then flip back to their day schedule. It’s the flipping back and forth that actually puts them at greater risk.”

Your circadian rhythm is your body’s internal clock. It’s been described as a 24-hour sleep-wake cycle that tells your body when it needs to store energy and when it needs to expend it. A typical “low point” in this sleep wake cycle is between 2 am and 4 am — conveniently, when many World Cup games will air in Asia.

Fans who power through this cycle to watch a game or two every few days may throw off the way that their bodies regulate certain physiological factors, like glucose level. This, in turn, can trigger sugar cravings during the day, because they body enters a type of crisis mode, believing that it won’t have adequate time to rest and store energy for the next day.

“We imagine that the body is saying, ok, well, if you’re up at night there’s got to be a reason that you’re up and you’re probably going to need a lot of energy,” Zeitzer says. “So people tend to crave more sugars and fats. And this can happen even after a single night of sleep disruption.”

Continuous patterns of irregular sleep like this are risk factors for conditions like type two diabetes, Zeitzer says, but this isn’t likely to be an issue for World Cup fans who miss a night or two of sleep to catch the quarter final. Instead, short-term flipping between timezones puts them at risk for certain work-related injury, and just generally feeling sub-par, like one World Cup enthusiast in Japan noted in the Asahi Shimbun after watching several rounds of group play:

“I have been sort of under the weather since last week, and I know why. This is the price I am paying for staying up well past midnight to watch World Cup soccer games on television.”

Even though all the Asia-based teams have been eliminated from the tournament, previous viewership data from the 2014 World Cup suggests that this won’t stop hardcore fans in Asian time zones from watching A total of 487.8 million people watched the World Cup Final in 2014 — and of those, 53.2 million were in China (this audience share was second only to host-nation Brazil).

While Zeitzer notes that a regular sleep patten post-World Cup will be enough to restore circadian balance, the wounds of staying up to watch your team lose in the finals may run even deeper. “You’ll recover,” he jokes, “depending on what your team did.”