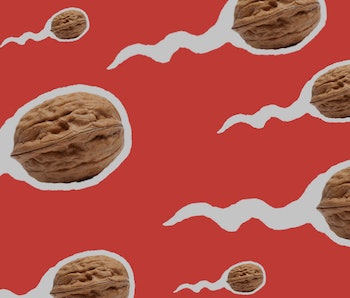 The Western world’s sperm is in crisis. In July 2017, a huge meta-analysis suggested the sperm count of the average Western male had been halved in the past 38 years, and nobody seems to know why. There are a few theories, but even fewer solutions. The latest attempt to remedy the world’s nut problem comes from, well, scientists funded by the International Nut and Dried Food Council (a real thing) who say that eating nuts boosts sperm health.

The study, which hasn’t been peer-reviewed yet, was presented on July 4 at the European Society of Human Reproduction and Embryology’s annual meeting, held this year in Barcelona. Studying the effects from daily consumption of 60 grams of nuts on 98 young men, researchers from the Human Nutrition Unit of the Universitat Rovira i Virgili in Spain and the Autonomous University of Barcelona concluded that, yes, eating nuts is linked to better overall sperm health.

Though it was funded by an international trade group, the study was rooted in some evidence that eating nuts could contribute to semen quality. In their study summary, the team writes: “Recently, some studies described that healthy diets rich in omega-3, antioxidants (e.g. vitamin C and E, selenium and zinc), carnitines and folate could improve semen quality. Because nuts are nutrient dense foods containing some of the above-mentioned nutrients, we hypothesize that, added to a western-style diet, would beneficially affect semen quality and functionality.” There is indeed some research suggesting that such supplements could improve sperm health, though the studies have all been quite small.

The participants in the randomized study, which started out as a group of 119 healthy men, were all between the ages of 18 and 35 and, crucially, generally followed a “western-style” diet — this is key to the team’s hypothesis that diet is one of the causes of declining semen quality. Splitting these men into two groups, the team asked half of them to eat 60 grams per day of an almond-hazelnut-walnut mix in addition to the regular food they ate each day. The other half carried on with their regular diets.

Before and after the 14-week study period, the team measured sperm quality using criteria laid out by the World Health Organization, which included sperm count, vitality, motility, and morphology. Just as the team predicted, the “nut group” showed statistically significant improvements in all of these areas compared to the control group by the end of the period. They also looked up close at the sperm to look at its “DNA fragmentation,” which is often observed in men with infertility. After the 14 weeks, there was a “significant reduction” in this measure, as well.

The team cautions that the study group was too small and specific — healthy young guys with a Western diet — to extrapolate any global dietary recommendations just yet, so they’re presenting their study as a jumping-off point for scientists looking to investigate the link between diet and sperm health. There are also a number of other purported sperm-harming factors that the team didn’t account for, like exposure to pollution, smoking, love of skinny jeans, laptop placement on the crotch, or even long-term stress.

As the world’s sperm count continues to dwindle without explanation, any lead on a potential solution is worth consideration, as long as we take into account conflicting interests. Though the International Nut and Dried Food Council may stand to profit if men turn to nuts for the sake of their nuts, any man with nuts could benefit if doing so legitimately helps.

More like this
Mind and Body
5.6.2022 7:05 PM
What overturning Roe means for medication abortion
By Katie MacBride
Mind and Body
5.8.2022 8:00 PM
Some dangerous — even banned — drugs lurk in dietary supplements
By C. Michael White and The Conversation
Mind and Body
5.14.2022 3:00 PM
Does smoked meat cause cancer? A dietitian assesses the damage
By Elana Spivack
Related Tags
Share: