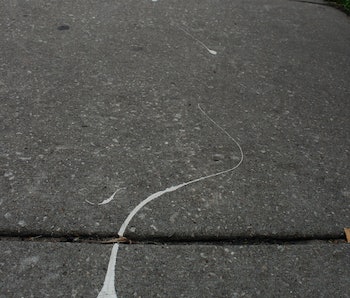 Sperm counts are sinking fast, and scientists don’t really know why. It’s not just a problem for people who want to have children; some scientists think sperm quality is an indicator of more subtle health problems in humanity at large. All of the implications of this change aren’t clear yet, but a new study published Tuesday identifies one factor that might be contributing to declines in male fertility: air pollution.

In a paper in the journal Occupational & Environmental Medicine, researchers from the Chinese University of Hong Kong report that frequent exposure to certain small particulate pollution — the kind currently choking cities like Beijing and Delhi — is associated with a lower number of sperm and with lower-quality sperm. In particular, it’s air pollution known as PM2.5 — particulate pollution 2.5 microns across or smaller — that’s drowning humanity’s swimmers.

“PM2.5 is the big killer,” Elizabeth Muller, co-founder and executive director of Berkeley Earth, a non-profit dedicated to data analysis on climate science, told Inverse in May. PM2.5 is a direct result of the use of fossil fuels, and it carries specific health risks. Exposure to PM2.5 can be just as harmful to your lungs and heart as smoking cigarettes, and it turns out this air pollution can affect male fertility too.

“Exposure to ambient PM2.5 air pollution is associated with a lower level of sperm normal morphology and a higher level of sperm concentration,” write the authors in their study. The team gathered their data by conducting a cross-sectional study on 6,475 Taiwanese men aged 15 to 49 years old from 2001 to 2014. Assessing sperm count and quality according to World Health Organization guidelines and measured PM2.5 concentrations at the men’s homes, they used multivariable linear and logistic regression to define the link between exposure to these pollutants and reproductive health.

They concluded that there is a clear relationship between PM2.5 exposure over time and declines in fertility as measured by sperm motility, morphology, and concentration.

And while the association they found was robust, the effect size was rather small. “Every increment of 5µg/m3 in 2-year average PM2.5 is associated with a decrease of 1.29% in sperm normal morphology,” the study’s authors write. What this means is that they found a small drop in normal sperm morphology for every small increase in PM2.5 concentration where the test subjects live.

This study builds on previous research that has shown a negative association between temperature and fertility and proposes a specific mechanism by which fossil fuel buildup in the Earth’s atmopshere may affect male fertility. Nevertheless, while the researchers controlled for confounding factors in their analysis, air pollution isn’t the only thing that can lower sperm quality. So if you’re trying to get pregnant, you might as well ditch the skinny jeans.