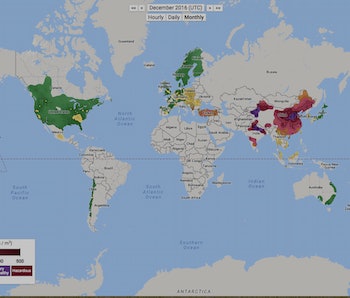 Go to China to talk about climate change, and you’ll end up in a conversation about air pollution, Elizabeth Muller tells Inverse.

Muller founded Berkeley Earth with her father Richard in 2010 in an attempt to do a better job documenting global temperatures. After reconfirming that yes, the planet is warming and, yes, humans are to blame, Muller set out for China — the largest emitter of greenhouse gases in the world. “If you don’t do anything about China, you’re not solving the problem,” she says.

China is in many ways leading the charge on transitioning away from fossil fuels, though it’s not out of the same environmentalist sensibility that is espoused by many in the United States. Mostly, Chinese people would just like to be able to breathe. Air pollution kills an estimated 1.6 million people in the country each year.

For the last couple years, Berkeley Earth has mapped real-time air pollution levels in China and a handful of other regions around the globe, compiled from regional data. The metric is PM2.5 — particulate matter measuring 2.5 microns across or smaller. “PM2.5 is the big killer,” says Muller. It penetrates and builds up in the lungs, increasing risks of heart disease and cancer.

Below, we mapped particularly bad days in different parts of the world.

The folks at Berkeley Earth have calculated daily exposure to PM2.5 in terms of cigarette equivalents. In the red, it would be like smoking five cigarettes a day. In the purple, it’s 10. In the brownish purple, you’re looking 15 and up. A bad day in Beijing is a pack of 25, and they’ve recorded up to 63. “It’s not just the adults who are smoking this, but the kids and the babies, too,” Muller says.

Coal from industrial power plants are a significant contributor to PM2.5, but there are other sources, too, including dust storms. “Every once in a while you’ll get this big, gray, death-blob out in western China, and we’ll just look at that and say, ‘What is that?’” says Muller. “Our best guess — and this is very much a guess — is that it’s probably about half from local industry and local usage of coal, and about half from dust — and this is desert dust.”

“In India, much of their air pollution is coming from burning things — cooking fires, and small farm fires,” says Muller. There’s some indication, although the science is still young, that certain sources of PM2.5 have more severe consequences than others. “We do have some good reason to think that PM2.5 from coal is worse than PM2.5 from, say, cigarettes — ironically,” she says.

“Africa is certainly one of the areas that I would really love to get the data for. And as of now it’s just not available,” says Muller. “There’s good reason to believe that it’s bad. It’s probably not as bad as China, just because it doesn’t have as much developed heavy industry, but it could easily be as bad as parts of India.”

Turkey straddles the East and the West. Air pollution pressure points are centered on areas of industry, but another problem is that desert dust blows up from the south when the winds are blowing that direction.

“Air pollution in Europe, especially in winter, was much worse than we had expected it to be,” says Muller. “The contrast between Eastern and Western Europe is fascinating. We haven’t done a detailed study of Europe, so we don’t know how much pollution from Eastern Europe is blowing over Western Europe, versus actually being generated in France and Germany.”

“As green as it looks, even in the U.S. we think that air pollution kills more people than automobile accidents, more people than are killed by guns. Just because it’s green shouldn’t make us necessarily feel, ‘Oh, there’s not an air pollution problem in the U.S.,’” says Muller. “It’s pretty rare in the U.S. to get to a point where you actually want to be wearing a mask, but it doesn’t mean that it doesn’t happen — especially for kids and for vulnerable populations, people with asthma etc.”

She suggests paying more attention to local air quality and changing behaviors when the conditions warrant it. “On bad pollution days, you don’t want to bike to work or walk to work. You’re better off working from home, if that’s an option, using a good air filter that collects PM2.5 particles.”

More like this
Science
5.18.2022 8:00 PM
Pollution is responsible for one in six deaths each year — and it’s getting worse
By Tara Yarlagadda
Science
5.10.2022 8:00 PM
4 of the worst heat waves in the last 60 years went unrecorded — here's why
By Elana Spivack
Science
4 hours ago
Melting permafrost could expose millions to invisible cancer-causing gas
By Chris Baraniuk and Knowable Magazine
Related Tags
Share: