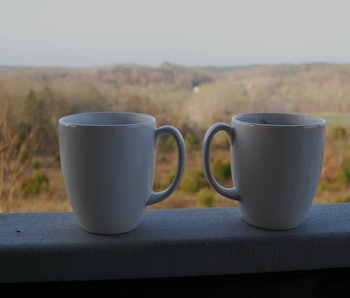 A paper published this week in JAMA Internal Medicine shows that your genetics probably won’t prevent you from reaping the health-enhancing benefits of coffee. The many findings from the study on nearly half a million people are fascinating, but perhaps most interesting is the revelation that a lot of British people drink a savage amount of coffee.

The research team, led by Erikka Loftfield, Ph.D., a research fellow at the US National Cancer Institute, had set out to determine whether coffee drinking was equally beneficial to everyone. There’s been a lot of research lately showing that coffee is generally good for you, but what is less clear whether there’s an optimal amount of coffee to drink and whether people who aren’t as good at metabolizing caffeine reap as many benefits.

“[Does] heavy intake, particularly among those with common genetic polymorphisms that impair caffeine metabolism, increase risk of mortality?” the team asks in their paper. Their analysis answered those questions — and also revealed some slightly concerning British habits.

One of the great things about this paper is that the research team had a huge pile of data on coffee drinkers to draw from. They base their analysis on a sample of 498,134 people from the UK Biobank, which collected urine and saliva samples from people between the ages of 40 to 69 from 2006 to 2010. The organization also happen to have collected lifestyle data — this is how we know how much coffee people drank — from 2006 through 2016, so the analysis yields insight into both body and mind.

From here, the researchers broke down the coffee-drinking habits in the data set, finding that 13.4 percent of people drank four to five cups per day, 4.1 percent drank six to seven cups per day, and two percent drank eight or more cups of coffee per day. Added together, that means that 19.5 percent of this study cohort drank at least four cups of coffee per day. That’s a lot of coffee.

Perhaps rightfully so, the team had “concerns about coffee” among people who drink more than five cups a day, which led them to investigate whether there was such a thing as too many cups. They were also concerned that the documented positive effects of coffee would not translate to people who metabolize caffeine differently because of certain genetic differences.

The good news is, they found a link between drinking more coffee — even over eight cups per day — and a lower risk of mortality. The association even held for coffee drinkers who were genetically slow or fast metabolizers of caffeine, and it didn’t seem to matter whether people drank ground, instant, or decaf coffee. “This study provides further evidence that coffee drinking can be part of a healthy diet and offers reassurance to coffee drinkers,” the team concludes, but they are careful to point out that their study is observational and doesn’t show causality.

In early June, another paper was published in PLOS Biology, showing that certain concentrations of caffeine could have a rejuvenating effect on aging cells. But there was a catch: The animal study suggested you’d have to drink four cups of coffee per day to see any of these effects. Fortunately for Brits, the current study suggests that, for 97, 103 British citizens, drinking a “physiologically relevant” four cups a day is nothing special.

This is just one application of the treasure trove of data to be found in this study. The team also collected information on the types of coffee people drink, from instant coffee to espresso. For example, 19 percent of the coffee drinkers in this study reported drinking decaffeinated coffee, illustrating that using cups of coffee as a proxy for caffeine intake isn’t always a perfect measure. But for now, British people can revel in the knowledge that their coffee drinking tradition is alive and well — and may even yield some health benefits.