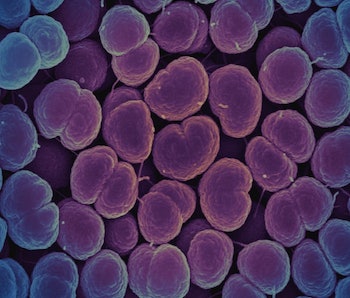 In the age-old battle of humans versus gonorrhea, we’re losing. Since 2009, rates of gonococcal infection have increased 46.8 percent in the United States. The good thing is that a team at Tufts University has just identified in a new paper how the clap affects men and women differently, which can lead to better treatment. But to do so, they had to go to China and use a study design that, had it been done in the US, would probably have inspired an episode of The Real Housewives.

Gonorrhea, caused by infection with the bacteria Neisseria gonorrhoeae, can be difficult to diagnose: Men show obvious and painful symptoms of the sexually transmitted infection (think burning urethra, painful testicles, and green penis discharge), but many women don’t show many symptoms at all and often don’t come into clinics. This left researchers like Caroline Genco, Ph.D., chair of the Immunology department at Tufts University and co-author of the new mSphere paper, with a dearth of subjects to study differences in how the bacteria’s genes were expressed in men and women. To remedy this, Genco and her team set up a sexual health clinic in the Nanjing Province of China. Then, things got weird.

“So, the way we designed that study is that the men come into the clinic,” Genco tells Inverse. “They have gonococcal disease. We treat it, and if they have more than two sexual partners, we enroll them in our study. Then we contact their wife, and we ask their wife to come in.”

Genco says that American journalists have been asking her to clarify that final step over and over again. But apparently, calling in a man’s wife when it’s been established that he has one or more sexual partners didn’t result in any marital disputes. This turned out to be very good for the field of gonorrhea research. Because of this setup, Genco and her team, for the most part, had a very good idea of how the women contracted the disease and could reasonably assume that they had the same strain of bacteria as their husbands. This meant that, when the team analyzed the genomes of the bacteria in men, they could then compare those genomes to the bacteria infecting their wives and see whether they were acting differently.

“We’ve always hypothesized that of course there are distinct environments in men and women. In the female genital tract there are bacteria — lots of good bacteria — that can be protective. Whereas the male urethra is relatively sterile,” she explains.

Genco notes that there was another important finding borne of their unconventional study cohort. They found that the men’s gonorrhea were expressing genes known to confer antibacterial resistance. As the rise of “super-bacteria” has shown, antibacterial resistance can arise when bacterial diseases evolve to become impervious to antibiotics, the only tools we have to fight them.

“While they both had the genes for antibacterial resistance these genes were being expressed in males far more than in female,” she says. “From a treatment standpoint, I think this might indicate that you need to use higher amounts of antibiotics in men because they’re expressing these genes.”

Genco’s not arguing that we flood male gonorrhea patients with antibiotics, however. She, like many other researchers worried about the rise of super-bacteria, notes that managing the amount of antibiotics being used in hospitals and clinics will go a long way to helping slow the onslaught of antibiotic resistance in general. But before we go any further, let’s give a shoutout to the wives of Nanjing, who really took one for the team in this study.

More like this
Science
Jan. 21, 2023
A deadly fungal plague swept the world of The Last of Us — is it realistic?
By Tara Yarlagadda
Science
Jan. 21, 2023
Plague study complicates a commonly held belief about the Black Death
By Samuel Cohn, Philip Slavin and The Conversation
Mind and Body
Jan. 17, 2023
Scientists recommend 5 minutes of walking to combat your worst habit
By Miriam Fauzia
LEARN SOMETHING NEW EVERY DAY.
Related Tags
Share: