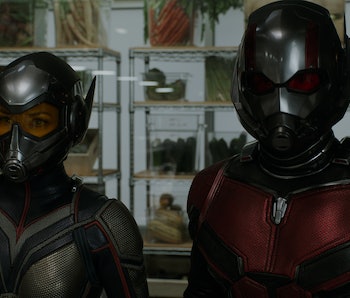 Do good things come in small packages? They might, and Marvel’s Ant-Man and the Wasp is proof of that. In the wake of the game-changing Avengers: Infinity War, the superhero caper-comedy co-starring Evangeline Lily and Paul Rudd takes things down a refreshing notch. Emerging reviews for the film are generally positive, with only a few critics allergic to bugs on the big screen.

On Wednesday, the review embargo for Ant-Man and the Wasp lifted and reactions began to surface online. For the most part, reviews are good! Critics are calling the film “fun” and “charming,” with praise heaped upon stars Rudd and Lily as co-leads. More critical reviews, however, dub the movie “forgettable” that falls short of the ever-raising bar pushed by the Marvel Cinematic Universe.

First, Inverse’s own James Grebey calls the film “a perfect compliment” to Avengers: Infinity War, dubbing it “a charming, hilarious success,” and a reminder that Marvel “can still do ‘small’ movies in between world-ending epics.”

“It’s not a throwaway palate cleanser after Infinity War, nor is it filler before the next major crossover. It’s a reminder that just hanging out with these characters and watching them go on their own smaller adventures is fun. Ant-Man is all about the importance of scale, after all.”

On IGN, Laura Prudom gives Ant-Man and the Wasp a positive review, praising the film for its creative action scenes “and finely-calibrated comedy” that rivals the rest of the MCU. “Ant-Man and the Wasp doesn’t reinvent the wheel,” Prudom writes, “but it certainly knows how to make the ride even more fun.”

“After the doom and gloom of Infinity War, this savvy sequel is a welcome change of pace, and a reminder that the MCU is malleable enough to tackle just about any genre and tone without losing its sense of identity. Needless to say, we’re eagerly ant-icipating Ant-Man and the Wasp’s next outing.”

For Rolling Stone, Peter Travers scores the film high with praise directed in particular at the leads. “Rudd is a winning combination of sass and sincerity,” writes Travers, “and it’s a kick to watch Lilly break out and let her star shine. She hasn’t had a part this juicy since she played Kate Austen on Lost; her smarts and screen presence lift the movie over its rough spots.”

“The secret of Ant-Man and the Wasp is that it works best when it doesn’t try so hard, when it lets charm trump excess and proves that less can be more even in the Marvel universe.”

Alex Abad-Santos, for Vox, is slightly more critical of the film, but mostly because of the sky-high expectations after the trifecta of Thor: Ragnarok, Black Panther, and Avengers: Infinity War.

“Competing with the seismic shock of Avengers: Infinity War or the indomitable triumph of Black Panther would put just about any movie at an unfair disadvantage, including the perfectly enjoyable Ant-Man and the Wasp,” Abad-Santos writes. “The question surrounding Ant-Man and the Wasp, then, isn’t how it pushes the MCU forward, but rather what director Peyton Reed … and his winsome crew do within the small pocket of space and time afforded to them by Marvel’s grand plan.”

“Ant-Man and the Wasp is an airy, nimble piece of filmmaking: Reed’s confidence to unapologetically embrace weirdness — like imagery of ants playing drums or responding to telepathic commands — gives the franchise its distinctly playful spirit … The film is bundles of fun, so much so that I found myself wishing it had a bit more to offer than just a good time at the movies.”

More critical reviews, however, dub the Ant-Man sequel a more dull experience than previous Marvel films. Darren Franich of Entertainment Weekly grades Ant-Man and the Wasp a C+, with painfully meta jokes that “you start to wonder if you paid movie-ticket prices to read the internet two years ago.”

“It feels less like a feature film than a meme somebody made about an Ant-Man trailer,” Franich writes. He continues:

“Ant-Man and the Wasp stumbles by trying to take itself even half-seriously. Poor Hannah-John Kamen looks stranded as the notional super-baddie, the space-phasing Ghost. Sad flashbacks, bad attitude, lame powers: She’s the most boring villain since that time Thor punched some elves.”

Eric Kohn of IndieWire is also critical, but more generous than Franich, praising the film as “a rollicking odyssey that starts as a rescue mission” before it “dovetails into a convoluted crime story.”

“No matter its uneven variables, Ant-Man and the Wasp remains satisfying in that slick, crowdpleasing sort of way that became Marvel’s hallmark, at least until the shocking finale of Infinity War. That movie upended years of formula with a grim cliffhanger that left audiences reeling. Released just a few weeks later, Ant-Man and the Wasp practically feels like a mea culpa, or at least the opportunity to take a breath. At this point, no studio does a better job of giving the people what they want.”

Ant-Man and the Wasp will be released in theaters on July 6.